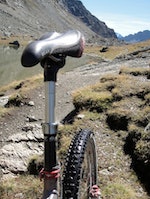 I’ve been running Giant’s Contact Switch seatpost for six months now. To recap it offers 100mm of air sprung, oil damped travel, infinitely adjustable via the cable operated remote lever. Its obvious selling point is the £170 price making it a fair chunk cheaper than the opposition. So how does this relative bargain fair out on the trails?

Well first impressions were good. The post has a quality look to it with nicely anodised finish complete with handy height marks. Tipping the scales under 600g is pretty respectful too, giving away just 50 or so grams to the class leaders in the tested 400mm length. A shorter 375mm version is also offered; both are only available in 30.9 diameters and share the same 100mm internals and universal lever.

Despite the Mk1 Santa Cruz Nomad test mules lack of designated line guides the full length, top tube routed, front mech guides did a fine dual purpose job and with a zip tie around the base of the post allowed a pretty tidy set up.

The lever is slim enough to be mounted between grip and shifter/brake lever. The flexible, V-brake style noodle allows left or right fitting but does limit rotational position somewhat. Nevertheless it fell easily to thumb although it does look like you could whack a knee on it on a shorter or narrower cockpit.

If you’re curious it’s on the right because a I have a lockout on the left on another bike and b if  I’m faffing with the seat height when I should be braking I’ve still got the back brake covered.

The cable connects to the workings inside the post head which gives a clean look and a degree of mud proofing but does make the job of fastening it a little fiddly, (and the seat needs to be removed for proper cleaning). A barrel adjuster at the lever does allow fine tuning though.

Initial operation was very good with a light feel to the lever, and the action of butt tapping the seat to lower quickly becomes second nature and is surprising controllable in terms of how low you want to go and makes the multiple but fixed options offered by Specialized and the forthcoming Fox questionable. Return speed is good, fast enough without it feeling like an ejector.

After a couple of local rides the bike was packed up for a week of uplift assisted gravity singletrack in the Tarentaise Alps. Day one coincided with the final day of the summer season lifts in Tignes, it was also the same day that Danny Hart rocked the world champs and conditions for us were just as bad. The action remained consistent throughout the ride but after the second day return speed was noticeably slower and occasionally needed a manual tug to regain the last 20mm or so. A quick dismantle of the collar allowed a clean up and regrease to restore performance. In fairness the other dropper posts in the group suffered the same fate. 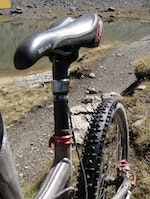 Throughout the week the post continued to perform well, a small amount of play developed but was totally unnoticeable riding and hasn’t got any worse in the time since. It’s not enough to rattle so less of an issue then say a worn shock bushing.

By the end of the week the lever action had stiffened up so a strip down was in order on return to the UK. Despite the internal fixing a fair bit of junk had made its way inside the clamp head and entered the cable, a new gear cable later as was well again.

For me this was really a two part test; firstly does a dropper post make enough of a benefit to warrant the cost, weigh and maintenance, and if so is the Giant a worthy rival to the established offerings?

Well part a depends: I’m pretty happy to ride 95 % of trails with the seat at full mast, slamming it for downhill and freeride type malarkey but I have to admit that on technically challenging routes with steep descents I’ve ridden harder and exploited the handling benefits of a true all-mountain bike further. I’ve had more fun and more flow with the dropper post fitted.

However there have been several rides were I’ve used it because it was there but didn’t feel that there was a tangible benefit.

So it’s not for everyone. Oh and if your tempted to save money / weigh / complexity with an under the saddle lever option I’d avoid it, you’ll soon wish you had the remote.

And the Giant Contact post? Well yes I like it a lot. It performs well, looks good and is a decent weight. It needs regular maintenance to keep it running sweet but this does seem the norm for cable operated units, (I’m going to try Gore sealed cables next time), and the low price is a real bonus.

The full layback style is a must for my current frame but maybe too much for you and whilst some will insist that 125mm of drop is essential the 100mm offered here is adequate most of the time and will fit a wider range of bikes and rider sizes. (I’ll admit I dropped the whole post another inch for a particularly steep and steppy switchback laden alpine descent, but this did have a 400M vertical drop penalty if you got it wrong!).

It’s only bettered by the hydraulic action of the (inline only) Rockshox Reverb. If you can stomach the £275 price tag this is still the king. But if not and the 30.9 size, 100mm drop and layback style works for you this is a smart option.

If you like riding fast, and we mean really properly fast, there’s few better choices than the Spark 29er

If you like riding fast, and we mean really properly fast, there’s few better choices than the Spark 29er

Fantastic performance and great value for money, the Anthem is the perfect UK trail mountain bike, even in 29in guise