This is the newest generation Scott Spark and comes with an updated carbon fibre frame, making it lighter than previous iterations, plus the all-important addition of a 29in model.

The Spark’s roots are established in cross-country and marathon racing. The company uses its race team and the likes of Thomas Frischknecht for developing its bikes, which explains the Spark’s very aggressive stance, low front end and componentry geared towards the simple task of going as fast as possible. There are few bikes more capable than the Spark.

It’s also why Scott is right at the front of current carbon fibre development. The frame is the lightest Spark ever made, but this Expert model, the third tier model at a quite hefty £2,899, makes do with just a carbon front triangle. It’s made using the Swiss company’s IMP5 (integrated moulding process) construction process. The swingarm and dropouts are made from alumium, and the U-Mono rocker linkage is aluminium too.

While the carbon structure of the frame has been further evolved this year to reduce weight, Scott has also improved the Spark’s stiffness. They’ve borrowed larger diameter pivots from the Genius LT, and the rocker linkage is a narrower one-piece forged design. As a result of the reworked frame and larger pivots, riding the Spark reveals a much tighter feeling bike, with less squirm detectable when pushing hard through corners and loading up the rear suspension. 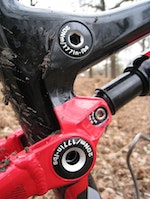 Something we’re really a fan of is the adjustable geometry offered on the Spark. A small chip in the lower shock mount can be orientated to lower the bottom bracket by 7mm and slacken the head angle by 0.5 degrees from the quoted figures. The bottom bracket is quite low at 12.8in (in the steeper setting), and we noticed that on the trail with more pedal strikes on objects than we’d ideally like. It’s something you soon get used to but still catches you out occasionally, especially when racing.

Other changes to the new Spark include a tapered head tube with carbon cups, direct-mount front mech mounts to snick the rear wheel in as close to the bottom bracket as possible.

Scott have opted for a trail-friendly 69.5° head angle, along with a 72.5° seat angle and a short 105mm head tube on our medium size sample. The head angle is about 1° steeper than the 26in equivalent. Chainstays are pretty short at 448mm and the wheelbase is 1112mm.

For 2012 the 26in Spark sees a travel increase from 100mm to 120mm, opening it up to more trail focused riders. In having to fit the larger 29in wheels, travel on the 29er is limited to 100mm front and rear.

The Expert doesn’t get the DT Swiss developed Nude shock found higher up the range, but a simpler DT Swiss M210 ABS instead. The really clever bit is the fact it’s connected to a handlebar-mounted control lever that switches the shock between open and locked out (there’s no ‘traction mode’ available on this shock). In a clever turn, the Twinloc lever is also hooked up to the forks, and has the same effect as it does on the rear shock. So when you get to a stretch of smooth fireroad or Tarmac, you can flick the lever and lock the Spark out for some serious stomping speed. You might not think it that useful reading it here, but out on the trail, we found it surprisingly valuable. Would we miss it if it was taken away though? Probably not, no. But we know many racers will really value it. And that’s really who the Spark has been designed for.

Up front the RockShox Reba fork goes well with the rear suspension, with a nicely balanced feel from front to back, and offers enough adjustment to make full use of the available 100mm of travel. We were disappointed to not see a bolt-thru axle – we’re seeing this on so many bikes, even XC ones like the Spark, and we’re fans of them. At least the DT Swiss RWS Quick Release lever do go some way to increase the security.

Costing £2,899, you would expect a decent specification. And you’d be right. There’s a mix of Shimano SLX and XT, with an XT triple chainset offering a good spread of gears.  A bike like the Spark really ought to have a 2×10 chainset though, and our only guess that it comes fitted with a triple is to keep the European markets happy, where 2×10 hasn’t yet been adopted as quickly (no doubt due to their hillier terrain than ours) as over here.

A DT Swiss XR39 32-hole wheelset isn’t that light at 1,750g and is a prime area for upgrade. When we fitted the stiffer and lighter Reynolds XC29 carbon fibre wheels the difference was staggering, so that’s something to think about. On their own they stayed true and didn’t require any attention. We’re fans of Schwalbe’s Rocket Ron tyres, pretty much ideal for most UK trail conditions.

Finishing off the bike is a cluster of Scott branded parts (seatpost, stem, bars) and a nice Selle Italia Team Edition saddle. We normally change saddles straight away but not to in this instance.

With its racing roots, it’s no surprise that the Spark has an aggressive stance right out of the starting blocks. The fitting of the reasonably short 80mm stem however is a smart move and in combination with the 680mm flat bar, with a sweep that feels just right, handling was fantastic on the singletrack and twisting through the trees.

While the Twinloc is a brilliant bit of design, it does lead to a spaghetti of cables around the front of the bike – not the prettiest and certainly ugly when alongside the Specialized Epic with its cleaner lines. In use we actually found it came into its own on more than a few occasions; in one particular Gorrick XC race several long smooth fireroads were the ideal test, and allowed fast out of the saddle progress. Everywhere else though, the suspension was composed enough to be left in open and for general trail riding this is certainly the best setup.

However, the Spark’s suspension isn’t the plushest on test. It has a very taut, stable and firm feeling that only works when it really has to. For racing this is ideal, nice and platformed most of the time, but it’s not the kind of suspension setup you can really use to your benefit on more challenging trails. It’s well composed though, doesn’t easily get flustered, but doesn’t offer the bigger hit capability of other designs. It feels more like a hardtail than other full-sussers.

The improved stiffness of the bike was noticeable, but the wheels showed up some flex. We fitted a pair of carbon fibre wheels and the difference was immediate. In this setting the frame demonstrated an impressive ability to track straight and true when pushing hard, especially out of the saddle where there was no detectable flex from the rear.

Let’s get the negatives out of the way first, it’s a good pound heavier (25.5lb without pedals) than it ought to be though, and we can’t give it the full thumbs up due to the speccing issues we raised earlier. As a bike for upgrade potential though, we can’t fault it.

On the positive, Scott has managed the tricky job of making a Spark 29er without losing everything we loved so much about the 26in model. It manages to still possess the raw speed that the original offered, and there’s still a sharpness of handling that makes the Spark one of the best choices for rapid trail progress.

If you like riding fast, and we mean really properly fast, there’s few better choices than the Spark 29er.

Santa Cruz release the Tallboy LT and Tallboy LTc, both with 135mm of travel and of course 29in wheels

Santa Cruz release the Tallboy LT and Tallboy LTc, both with 135mm of travel and of course 29in wheels