Giant Anthem X 29er 1 – £2,295
It’s taken a while but Giant has finally given us a full suspension 29er, after it first released the XtC hardtail. It obviously took a mere nanosecond to decide which bike should lead its 29er charge, the long-serving Anthem the clear choice to spearhead the company’s push into the growing 29er market.

The Anthem has been a staple of Giant’s range since 2006. In a way little has changed, but really the latest bike is light years ahead of the first generation Anthem.

Giant uses Aluxx SL aluminium in the Anthem, with a hydroformed downtube that sweeps down from the head tube to the bottom bracket with a graceful curve.  The top tube takes the shortest part between the head tube and curved seat tube, with a lovely taper along its length.

The Fox Float RP2 shock is mounted vertically, with the two short linkages that make up the Maestro suspension mounted right behind the bottom bracket shell and to the curved seat tube, with the small swingarm featuring dramatically dropped chainstays. A short section connects the stays to increase the swingarm stiffness, but clearly hampers mud clearance.

Up front Giant introduces OverDrive 2. This new headset ‘standard’ (we use that word cautiously) uses a wider 1 1/4in bearing in the top of the head tube. It’s the same head tube, just a newer bearing. This of course requires a fork with the necessary tapered steerer, and new stem. That means if you want to put a shorter stem on, there’s little chance of anything you currently own fitting.

On our size large Anthem the geometry measures 71 degrees head angle and a 73 degree seat angle. The wheelbase is 1125mm while the chainstays are long at 462mm (the same regardless of bike size) and the top tube is 24.17in.

Giant first introduced their Maestro platform in 2005; the company’s own take on the floating pivot point idea. The design uses short links between the main frame and swingarm, with both linkages rotating in the same direction (unlike VPP). Sandwiched between the short linkages is a Fox RP2 shock.

There’s a good reason Giant has only tweaked its Meastro subtly over the years, it just works brilliantly. It’s controlled throughout its travel and copes with all the typical obstacles you come across on a UK trail. Roots are handled with confidence and it tackles the bigger square edge lumps that usually show up flaws in any suspension design with aplomb.

It’s easy to set the shock up too, so you can spend more time just riding. We found the shock’s linear feel did produce a reasonable amount of bob when riding out of the saddle, but a quick flick of the lever, increasing the platform damping, soon took care of it. While you can happily leave the Propedal turned off most of the time, we left it on for the best performance.

The Anthem dishes out the full 4in of quoted travel, most rides ended with the rubber o-ring being pushed off the shock shaft. And it certainly feels like there’s more there than there really is. All-day comfort is up there with the best, we would have no hesitation in using an Anthem out of the box for a 24-hour race or other long distance enduro. It’s certainly more capable Anthems of old.

Fox supplied a F29 RL Evolution fork with the OverDrive 2 compatible tapered steerer. We were pleased to see Giant insisted upon having a 15mm thru-axle, the weight difference negligible and anyway, far outweighed by the sheer improvement in performance and peace of mind. It’s surely not long before these are standard on all mountain bikes.

There’s the kind of components fitted to the Anthem that you’d expect for a cross country race and marathon bike, one that’s adept at finishing a solo 24-hour race or a quick blast around a short course event. Up front is the Fox F29 fork with a bolt-thru axle, and the bike rolls on Giant’s own P-XC29-2 rims laced to Tracker Performance 32-hole hubs, using a CNC-machined hub shell and sealed bearings inside. Tyres are Schwalbe Racing Ralph’s in 2.25in width. They’re tubeless ready. 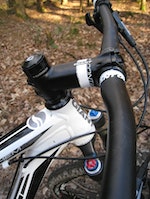 Drivetrain is SRAM, with a predominantly X7 flavour and lifted to X9 level at the rear mech. Plugged into the GXP Press-Fit bottom bracket is a 26/39 chainset that is the perfect match for the Anthem, giving more than enough gears to choose from with the 2×10 setup.

We’ve always loved Giant’s Anthem, and consider it one of the most well sorted bikes for most UK trail riding mountain bikers. There’s just the right amount of travel and it works so well, we never found it coming up short.. With the increase to 29in wheels there was a risk the essence of what made the Anthem stand head and shoulders above the competition would be lost, but fortunately that’s far from the case. However, at nearly 27lbs it’s a good deal heavier than the 26in equalivalent, and this is a real area of concern for 29ers at this pricepoint. Unless you pay big bucks for carbon everything, a 29er is, all things being equal, going to carry a weight penalty. Mountain biking has come a long way in 20 years, and 29in wheels are clearly a positive step forward, but the extra weight sets bikes like this back quite a lot from where they really should be.

There is a clear difference in handling from the 26in; it’s slightly slower in response to steering inputs, it’s not quite as direct in feeling. But that’s far from being a criticism; in fact it’s probably even better suited to the target rider than ever before. There’s still a lack of rapid acceleration and burst out of slow corners, a common 29er complain, and the heavy wheels and high overall weight no doubt contributing to the lack of acceleration.

However, looking at the geometry data above and the steep 71 degree head angle does give the Anthem a more cross country race suited poise. Out on the trail in a range of situations, whether it’s just rolling along or charging, the Anthem is a quick bike. Get it up to speed and it’s happiest, and it tanks along, blasting through rock gardens and sweeping through the bends with big speed. And big smiles.

Sizing remains an issue, there’s just too big a gap from medium to large, and makes it difficult for a 5’11” person like myself to choose the right size. I’d like to see a M/L in-between size introduced as Giant offer on its road bikes.

Traction, due in part to the Maestro suspension plus the bigger wheels increased contact patch, is huge whether the trail is dusty dry or the roots are damp and slick. Even with summer tyres fitted we rarely struggled on muddy trails.

Having tested an Anthem before we think it’s the best bike in the Giant range because it really does what it sets out to do. It’s quick, great value for money; it’s definitely the ideal choice for marathons and 24-hour races. The only snag is you’ll need to change the stem and bars if you want the handling to be as good as our test bike

A legendary rider in the mountain bike world, we chat racing and keeping motivated with the star that is Tinker

A legendary rider in the mountain bike world, we chat racing and keeping motivated with the star that is Tinker

Another stunning selection of photos from the day's racing South Africa