It would seem Michelin have been a bit quiet on the tyre front in recent years, but a pair of the new Wild Grip’R Advanced tyres arrived in the post the other day, so we’ll assume there’s a concerted effort from the French company to up its game.

Which is a good thing: some of our favourite tyres over the years have worn the Michelin brand on the sidewall. The Grip’R isn’t a new tyre as such, rather it’s been around for a number of years, and for 2012 has been completely updated. Residing in the company’s ‘mixed terrain’ category, its tread pattern screams all-round trail riding, a candidate for a fit-and-forget tyre if ever there was one. The Grip’R is one of those tyres that looks like it will probably excel in about 98% of condition; dry, moist and even muddy trails.

The Grip’R is available in two forms, the standard 60 TPI casing and what we’ve got here, the pricier Advanced version, which gets a Gum-X compound and 110 TPI carcass. The tread pattern is described by Michelin as being “optimally arranged to provide the best balance between grip, rider output and self-cleaning capability without sacrificing performance in one area for another.” The angular orientated blocks give the tyre a ‘fast’ look, with an equal gap between the central, middle and outer blocks. Something Michelin have focused on a lot is to ensure the knobs are well supported at their bases to prevent the softer compound from squirming about too much.

So there’s plenty of reinforcing in evidence around the blocks. The central knobs are well supported too at their base to prevent too and the outer flank of knobs is interconnected via block reinforcement. Siping across these blocks allows them to move about when in contact with the trail and improve traction.

We fitted the tyres, which measure 2.25in and are spot on for that stated size, to the Trek Fuel EX 8 we’ve been testing, loaded the car and head toSouth Walesfor a weekend of riding. Conditions for the weekend just gone weren’t far from being perfect; dry, dusty and fast. The trails around Afan offer a good mixed of groomed trail centre fare, to more naturally occurring trails through the loamy forests with roots to contend with, and a good smattering of extremely rocky parts that can easily rip a weak tyre apart. 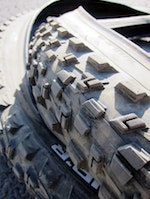 The Michelin’s proved the perfect contact between the bike and trails. They roll fast, the many long climbs and sections of fireroad proved their capability in this department. Pushing hard and into corners they reveal good traction right across the carcass. Leaning hard onto the edges reveals a very progressive slide when reaching the limits, none of that nasty sudden breakaway that some tyres deliver when on riding on the end of the bars.

I was hitting the trails hard, as hard as could in places, and the tyres coped really well. One puncture in 10-hours of riding didn’t offer much to complain about – the cheapo thin inner tubes that Trek uses don’t go far in surviving snake bites. Inspecting the tyres back at the car park after two days of hard riding reveals no gashes, rips or broken knobs. The side walls aren’t super fat but there’s enough material there to give good support and prevent gashses.

As for the Gum-X compound, well it really seems to work. It gives the level of confidence we’d expect of a soft compound tyre, but it appears after this short stint of riding that it’ll will last longer than other tyre brands soft option, making them better value for money.

To sum up, the Grip’R tyres really impress. They’re fast, give good traction, are durable and reliable. We like.