For 2011, the Cycle Show has moved from London’s Earls Court to the NEC in Birmingham.

We popped along on Thursdays trade day to see what’s what and, without wanting to give it all away just in case you plan to attend, here’s some of the things that caught our eye.

Pivot’s carbon fibre Mach 5.7 arrives in the UK. This is the first and currently only sample that has made it over from the US. The full skinny on it here.

An Italian bicycle company with a long history, Bianchi isn’t being left behind in the rush to bring a 29er to the market. The Jab uses a nicely hydroformed frame, and the model here costs £1450 with a 3×10 Shimano XT groupset, RockShox ReconTK fork and Magura MT4 disc brakes.

These fancy cassettes from Spin are designed for the road, but the fact they wigh just 99g meant we had to include them. They’re CNC-machined from a single billet of aluminium, similar to SRAM’s RED road cassette.

A helmet made from corrugated card. Yes, really. 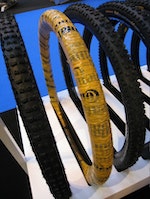 Continental has a new 29er tyre under wraps. Quite literally.

After Eurobike, you’d think there would be plenty of 29ers on show. But actually it turned out to be the opposite case. With many of the large brands not in attendance, there were only a small handful of them. This is Spanish firm MSC’s new 29er, which retails just over £2000.

MSC has its roots in downhill, but it’s in the process of shifting its attention to XC bikes, with 100/120mm bikes the focus. This is 100mm 22lb offering made from carbon fibre. Easily one of the nicest looking bikes at the show. NRG4, the guys who bring MSC into the UK, also look after a really tasty line of components. Take this ceramic bottom bracket for example. Any guesses on the price? It costs just £45.

They also showed us these cranks. XTR weight but a fraction of the price. Nifty pedal inserts allow you to adjust the arm length between 170mm and 175mm.

It's cyclo-cross season so you'll need a bike to get out there and hit the road, trails and just about everything in between, right?