We had a good nose around the truck when the team were laying on a press event recently (for the new Scalpel 29er), so all the guys involved in setting up and manning the truck and everything that goes on inside and around it, were a little more relaxed than they would be at a world cup race – which meant they were very approachable and more than happy to show us around.

Everything has its place. Everyone knows where everything is supposed to go. Organisation is essential when you’re supporting some of the fastest mountain bike racers on the planet, and that was abundantly clear. The support they get needs to be invisible; it just needs to be there, when it’s needed. The new truck makes that possible, being custom designed for the teams need.

There’s ample space created under the awnings that fold out of the truck for everyone involved at a world cup event, including the racers themselves, their support team, crew and all the workshop space you could ever need.

Inside the truck there’s space for the team to relax and rest, cook, prepare and eat dinner in a well fitted kitchen and dining area. There’s tons of dedicated bike storage space, a decent sized television, just about everything a mountain bike racer needs.

The truck is actually a massive Mercedes-Benz Sprinter with a specially prepared trailer. Pushed on how much it set them back, they told us it was in the region of 200, 000 Euros. It’ll surely make them the envy of the paddock.

Here’s a few photos from around the truck. We’ve got a nice little video which we’ll publish, as soon as we’ve finished editing it. 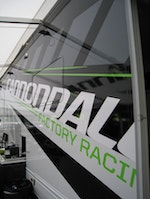 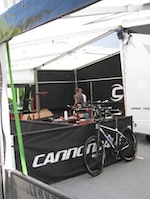 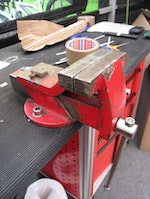 We’ve saved the best for last. How cool is this, a coffee machine that pops out the side of the truck! We want one of these fitted to our motor for our next mountain bike race, we’ll be the envy of the car park.