Cannondale didn’t rush to the 29er scene, bringing the Flash 29er out just a couple of years ago. That allowed the designers more time to really get the numbers for the new bike dialled, and avoid any of the problems that afflicted early incarnations. The result is that they’ve produced one of the best 29er full-sussers we’ve yet ridden.

The first thing that catches your eye about the Scalpel 29er is that it looks nothing like the small-wheeled bike of the same name. The shift to bigger wheels has given rise to a frame with distinctive curved tube shapes. Under the paint lies a frame made from BallisTec carbon fibre, a carbon layup that uses high impact resins and high strength fibres (first used for ballistic armouring,hence the name) so you can imagine it’s going to be tough. Furthermore, the designers have optimised the layup with strategically placed higher modulus fibres to tune the ride feel and stiffness factor.

Rather than merely bolting in some bigger wheels in the existing 26in Scalpel, fiddling with the geometry and proclaiming it to be brand new, they produced a bike that is far more trail-friendly than the very race focused 26in-wheeled Scalpel (a bike which really lives up to its name), including a travel increase to 100mm of travel.

To get the ride feel they desired and to enable the extra travel, they haven’t been able to adopt the same pivot-less design as on the 26in-wheeled Scalpel. So instead there’s now a pivot sitting just behind the bottom bracket, around which hinges a lightweight swingarm. The shock is driven via a short linkage, connected to the top tube, and to afford clearance the wheel and seat tube, the seat stay bridge has been shunted forwards  and now acts as a clamp around the lower shock linkage mount. This allows Cannondale to get the short chainstays it desires and keeps the swingarm as stiff as possible.

Ensuring lateral stiffness between the two frame halfs are ECS-TC (Enhanced Centre Stiffness – Torsion Control) 15mm thru-axles at both the main pivot and top linkage, using inboard bearings. By using the axles as a structural element the connection between the front triangle and swing arm can be a whole lot stiffer. You notice this when riding, with a very taut feeling throughout the frame. Loading the frame heavily into fast corners is where any lack of stiffness will be noticed, but that wasn’t the case with the Scalpel. 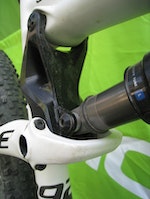 System Integration is a big part of Cannondale’s offering, with a 636g Hollowgram SL chainset, 1,250g Lefty Speed Carbon fork and 220g OPI stem and steerer combination and 107g Lefty SL hub that together is between 138g and 510g lighter than similar Fox/FSA/DT combinations.

Down at he bottom of the frame Cannondale have mounted the front derailleur to the chainstays. This is intended to allow the chainstays to be as short as possible, but as you can see from the photos the clearance between the end of the cage and the tyre (a 2.25in Schwable Racing Ralph) is extremely close. A bit too close in our books – further testing in the UK is needed to better assess this potential problem.

Other details include post mount disc mounts and a 142×12 bolt-thru rear axle – this is the same system Cannondale first introduced on their Jekyll – a move we welcome.

Geometry is a key talking point, and here Cannondale have managed to produce the Scalpel with geometry that is near enough identical to the Flash Carbon 29er. This is a good thing because as we found when we reviewed the Flash recently, it’s one of the nicest handling 29er hardtails we’ve tested, with an engaging, fast and pointy ride.

Bigger wheels tend to have more trail (the distance, horizontally, from the centre of the tyre’s contact patch to a line running through the bike’s steering axis, or the centre of the head tube), and steeper head angles, in combination with longer rake forks, are a way to keep the trail as short as 26in bikes.

How does it ride?

It took very little time to get used to. It feels just right out of the traps. Lively and quick handling and none of the traits that are often and frequently levelled at 29er bikes. Speed is brisk, and on some of the super technical riding around Finale Ligure, the destination for this first ride, it brimmed with confidence, never coming up short even when we pushed it hard keeping up with the Cannondale Factory Racing athletes.

Acceleration is fast, there’s no delay in building up speed out of tight corners. The steep head angle really allows you to hustle the bike through the tight stuff, but it never gets nervous or twitchy. When the trail opens up and gets fast and loose, the remains a stable ride. The longer stroke of the suspension is very usable and allows you to pump and flow through the rolling singletrack. Once up to speed the Scalpel just trucks along with such trail devouring speed that it takes you by surprise at first.

If you want to get around in a hurry, the Scalpel more than delivers, being one of the most assured 29ers we’ve yet ridden. It feels right at home blasting flat out or merely rolling along, with a stiff feeling frame, plush and supple suspension action, and geometry that allows you to make short work of the singletrack.

We came away highly impressed with Cannondale’s first foray into the full suspension 29er market.