The new Cannondale Jekyll is the Connecticut company’s latest all-mountain bike. Able to climb as fast as it descends, two travel settings with independent settings, a state of the art carbon fibre frame, and sharp handling give the Jekyll the potential to run away with the prize of the best trail mountain bike of the year. Two bikes in one, then.

There’s certainly no missing this bike, it’s a masterpiece of carbon fibre design. Cannondale have always had a penchant for oversized tubes, and the Jekyll takes that design philosophy to the extreme, with one of the biggest downtubes we’ve ever seen on a bike.

Cannondale use BallisTec carbon which they confidently claim is tough enough to withstand a heavy strike from a hammer. A few rocks thrown up by the trail shouldn’t bother the integrity of the carbon, one would hope. High-modulus fibres are placed strategically in areas that need beefing up to ensure the frame delivers the necessary stiffness. A co-moulding process is used to fuse the aluminium bottom bracket and shock mounts to the carbon fibre during the layup process, giving a level of integrity unmatched by any other process.

Cannondale famously took aluminium frame technology as far as it was possible to go, further than most other brands were willing to go. Subsequently they were late to the carbon party, but they delay allowed them to do their homework, and produce some of the best carbon frames we’ve ever seen.

It’s a marvellously well designed and finished frame, with a purposeful look. Their expertise with the material is second to none. How they manage to make this frame so incredibly stiff yet so light is quite something.

A huge BB30 bottom bracket, developed by Cannondale and which they offered to the industry as an open standard (which is being adopted increasingly across the industry) gives the frame a solid mounting point for the down tube, seat tube and main pivot. 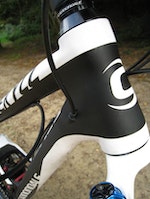 An equally huge 1.5in headtube anchors the front of the frame, with a straight 1.5in steerer tube on the fork ensuring there won’t be any flex through the steering.

The huge downtube serves as an ideal platform for attaching Cannondale’s rocker linkage. The linkage shelters the shock and uses double-clamped 15mm pivot thru-axles at either end of the linkage and a collet shim system is used at the clamps.

Bearings at the dropout are double stacked and a Syntace X-12 thru-axle system is used along with a sandwich-style derailleur hanger, and the pivot is double-clamped and oversized for good measure.

To create a bike that can be ridden everywhere with no compromise, Cannondale strayed away from standard shock technology and created, in partnership with Fox, the Dyad RT2 pull-shock. It’s an odd looking shock but is rather clever. It offers two modes, 90mm ‘Elevate’, for climbing, and 150mm ‘Flow’ for descending.

The pull-shock offers two completely different ride characteristics, all at the push of a handlebar mounted lever. In 90mm mode the damping is set for cross-country ride, with a firm, progressive spring rate. Into the 150mm setting and the suspension sags a lot more (40%) and the spring rate is altered, the head angle gets slacker and the bottom bracket lowers. Setting the shock is relatively easy, but putting in the required 250psi+ is a little unnerving. The downside presented by the pull shock is the lack of being able to determine the desired sag level – unlike regular shocks which allow the rubber band on the shaft to indicate sag level – so you either to get a friend to help you out, or trust the supplied settings. With some determined trial and error it’s possible to get it nicely setup – we strayed only a little from the recommend settings, running the shock a little softer to get the 90mm mode working to our liking.

Along with travel adjustment, the Jekyll alters the geometry. In In Elevate the head angle is 67.8° and the seat angle 73.6°, bottom bracket height is 13.8in. Flick the lever into Flow mode and the sag is increased, with the effect of lowering the bottom bracket by 1cm, and slackening the angles by 1° – a small change on paper but one that has huge consequences on the trail.

£4999 is a lot of cash, but the Jekyll Carbon 3 is well loaded with the latest equipment that goes a long way to justify its price tag. It’s worth mention that Cannondale offers two carbon models and two aluminium versions, with prices starting at a reasonable £2499 with, aside from a difference in frame material, virtually the same frame and shock technology.

The Carbon 1 gets rolling on a pair of impressively stiff and strong Mavic Crossmax ST wheels, the latest incarnation from the French wheel maker. They’ve been completely redesigned for 2012 and feature hubs with smaller flanges and extensive machining to save weight. The ST is the trail tag (there’s three wheels in the Crossmax 2012 line-up) and as such weigh 1,595g, making them a good everyday cross-country wheelset. They’re still running true and haven’t needed any mechanical attention so far.

The RockShox Reverb dropper post is the perfect accompaniment to the Jekyll’s ride-everything mantra, the hydraulic activated remote lever makes it easy to drop the saddle out of the way when dropping into steep chutes.

The rest of the kit has been flawless. The Shimano XTR rear derailleur (as we’ve said elsewhere) prevents the chain slapping the chainstays, we’ve haven’t had any dropped chain moments at all. The SRAM 2×10 chainset gives a good spread of gears and the Avid Elixir 9 carbon brakes give good stopping power and plenty of adjustment for dialling them to your personal preference.

Really the only blights on an otherwise well specified bike is the narrow Truvativ Noir carbon handlebar (as nice as they are) and the stem, it’s just too long for the sort of riding the Jekyll encourages. We swapped to a wider bar straight away and handling improved immensely. A shorter stem did the same trick.

The Fox 32 Talas RLC FIT fork, complete with 110/150mm of adjustable travel and Kashima coated stanchions, is one of the best forks in this category we’ve ever ridden. It’s our favourite fork right now. For the UK trail riding we do, the fork is a perfect match to the frame, the Talas adjustment is useful on longer slogs and it’s plenty stiff enough until you really get demanding. It is perhaps a shame that Cannondale don’t offer a Fox 36 fork option, or upgrade, for those riders who will rightly want to exploit the bikes potential for big riding that such a fork would allow.

Who’s it aimed at?

Cannondale have clearly aimed the Jekyll at trail/all-mountain riders, with the fitting of the Fox 32 forks. For most UK riding this makes perfect sense, being able to switch the travel down to 110mm gives the bike great climbing ability, and it scales most stuff as easily as a 140mm bike. 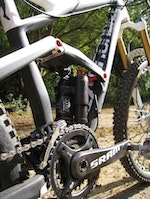 We’ve seen the bike fitted with burlier Fox 36 and longer forks, and for tackling something like the Mega or one of the new enduros, such a change would be ideal. The frame can certainly take the longer fork, that much is clear, and the resulting slacker head angle would be spot on for gravity assisted riding. But still, some will look at the bike, then the spec, and wonder why Cannondale didn’t stick a 36 on there in the first place.

While this bike is rather expensive, the same shock technology can be had for half the price. You’re clearly paying a lot for the carbon fibre frame and fancy parts on this top-end model, but they’ve done well to ensure the spec doesn’t show any shortcuts.

Brilliant. There’s so much performance to call upon that it never fails to impress. It’s been getting some serious mileage since it turned up, being hammered on our local trails and further afield and just laps it all up.

It takes a while to tune into the Jekyll, and to familiarise yourself with the two settings the shock provides. Working out when and where to switch the lever and get the most out of the bike takes a few miles and a couple of rides. Once you’re there though, you can really make use of the two modes the shock offers to fly up climbs and rocket down descents. 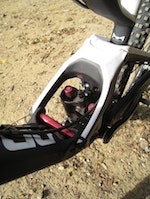 Handling is precise. You’re really aware of its incredible stiffness when linking the apexes of multiple corners. There’s plenty of lateral stiffness through the length of the bike when you’re leaning hard into corners, which along with the impressive traction the suspension offers, lets you keep things under control even when things get a bit physical.

It’s in 150mm mode that the Jekyll really excels. It feels like Cannondale designed the bike around this travel setting, dialled everything around it feeling just right, and added the travel reducing option as an afterthought – we’re sure that’s not how the design process unfolded at Cannondale. But we just can’t help feeling that the performance is second best in the shorter 90mm mode.

In long travel mode it rails corners, handles rooty sections with an assured feeling, provides tons of traction in all situations, and copes with everything we could throw at it, no harsh bottom-out in hard compressions and copes well with repeated fast hits.

Switch to 90mm mode and the angles steepen, meaning you can climb with more ease and efficiency. However, the suspension performance isn’t as reactive to trail undulations and bumps as it is in 150mm mode, despite our best efforts to set the shock up to achieve a more satisfactory performance. There’s a noticeable loss of small bump sensistiity when compared to other bikes in this sector, and it didn’t feel as capable when the trail got steep and steppy. With the Jeykll Cannondale has succeeded in making a bike that is akin to having two bikes between your legs, and it very nearly works. There’s little compromise, it climbs and descends with incredible ease and confidence, instilling the pilot with the ability to just ride anywhere.

As a technological achievement it’s impressive. As a fun bike to ride, we’re just not convinced.

The Jekyll delivers in nearly every area but just falls short of really blowing us away. If you want fully capable bike to ride everything and have fun doing it, the Jekyll is worth considering and you should definitely arrange a demo ride.

As chores go, cleaning your chain ranks right up there alongside unblocking the toilet or creasoting the shed for sheer unwelcomingness