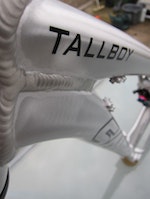 The aluminium Tallboy was released last summer. It’s identical to the carbon fibre model but it’s substantially more affordable, £1,699 compared to £2,399. Now you can get a slice of Santa Cruz’s big-wheeled VPP action and save a huge wad of cash.

Visually things are very similar. There’s the same 100mm of travel from the company’s VVP suspension design, which uses a pair of short linkages to suspend the swingarm. The latest generation VPP gives the rear wheel an up and back movement, so it rolls over bumps well, and reduces pedal-induced compression so it doesn’t lock down when pedalling through rock gardens and over ribbons of tree roots. The frame is made from aluminium and is shown here with the lush new satin coat finish. This clear coat finish exposes the brushed metal, it looks fantastic in real life – this photos certainly don’t do it justice. Tube profiles are a little slimmer and less chunky than the carbon model. Handling the bumps is a Fox Float RP23 shock, with the new Kashima coating giving a buttery smooth action. There’s a ProPedal lever with a choice of three levels of platform.

Geometry is also shared from the carbon Tallboy, with the same 71 degree head angle and 73 seat, short 444mm chainstays and 1108.7mm wheelbase on our size large frame. Weight is the only penalty in going aluminium; it weighs about 1.25lb more (the alu frame weighs 6.3lb). Sounds a lot, and it is, but for the trail riding (and not racing) we have in mind for the bike (think all-day romps were speed isn’t the outright priority), we’re not sure that’s going to be a concern. We’re confident a 27lb complete build should be possible with the kit we’re going to sling on it. Perhaps a smidgen lighter. We’ll see…

The carbon Tallboy has won many fans and received great reviews. It will be interesting to see if any of its great performance has been lost with the switch to aluminium. Will it handle as sharply? Will it accelerate as keenly? Will it be as stiff? Will the £700 saving be enough to quell such concerns?

Read our interview with Santa Cruz Bicycles’ Joe Graney, in which he talks about the challenges of long travel 29ers, the wheel size debate and carbon fibre.

There are pros and cons to 29ers. An advocate is Rob Dean, who shares his thoughts on riding bigger wheels.