Intrepid Apparel is a relatively new rider owned UK-based clothing company that we first saw at the Cycle Show last year, where they impressed us with a range of boldly designed jackets, shorts and jerseys.

We’ve been testing the Classic Race jersey (£59). It’s cut from a thick fabric that is a good companion for the cool temperature of recent weeks. Getting a shift on reveals the fabric is breathable; I didn’t get overly hot in it, when paired with a short sleeve base layer underneath. 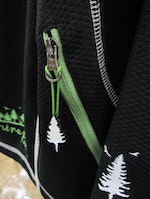 It’s nicely designed with contrast flat-locked stitching, with the seam around the neck taped so it’s comfortable next to the skin. Around the back there’s one zipped pocket and there’s a neat zipped pocket on the left arm, just below the elbow – I’ve not found a use for it yet but I can see it being useful in the Alps for storing a lift pass, when you need it conveniently to hand.

While the jersey impresses, it’s the Campaign baggy shorts (£85) we’ve been really blown away with. They’re cut from a heavier fabric making them perfect for harder hitting riding, downhill or aggressive call-it-what-you-want aggro riding. Basically they’re going to put up a fight in a crash and walk away laughing.

Thing is I usually prefer baggy shorts made from lightweight fabric, but the Campaign shorts surprised me. They’re not actually that heavy when riding and they’re shaped just right that there’s no hindrance when pedalling. Still, if it’s a speed ride you’re setting out on, the Campaign’s are best swapped for something a little lighter, but for all other riding, they hit the spot.

They’ve been particularly useful in the colder and wetter conditions of recent, with the generous length providing some coverage over the knee joints, and extra warmth around the hips.

I love the mad green colour, a departure from the more sombre grey, brown and black shorts that dominate my wardrobe. They have proved tricky to keep clean; after one muddy ride recently, they had to go through the washing machine twice before the mud splatter up the back of the shorts was removed. They’re packed with cool little design touches and features. There’s two zipped cargo pockets plus two angled pockets for somewhere to put your hands when kicking around in the car park waiting for your mates to sort themselves out. The fly is zipped with a double button closure, and there’s two waist adjusting ratchets.

I just love the chunky oversized plastic zips and ratchets that give the shorts a distinctive look, plus the little logo toggles attached to the zip pullers.

Worn together the jersey and shorts make a great combination. Uniquely stylish with a bold and refreshingly colour palette and reassuringly chunky design features that lend themselves perfectly to mountain biking. We’re nothing but impressed.