It’s October and that means it’s time for a new cold weather windproof/waterproof jacket. But there are many different styles of jackets depending on the riding conditions and how many layers you want to wear, so we’re going to look at two particular jackets today that make the most of the very latest fabrics.

Riding through the autumn and winter months is all about choosing clothing that is versatile enough to deal with a vast range of conditions, that might change even during a ride. Lightweight windproof and waterproof  hardshells are just that, offering good breathability and work well as part of a layering system. And when not needed can be stuffed into a pocket or hydration pack. Chuck a baselayer underneath when it’s mild or add in a heavier long sleeve jersey when the temperature dips.

We have two jackets here that fit the bill, Arc’Teryx’s Ascent Beta FL and Gore Bike Wear’s Fusion GT AS jacket. Both share the same brand new Gore-Tex Active Shell, a brand new fabric that comes with some impressive claims.

What is Active Shell?

Both are made from Gore-Tex’s new Active Shell. Gore-Tex is constantly pushing and developing fabrics designed to cope with everything we and the elements can throw at them. Active Shell has been a long time in development, and is a 3-layer laminate. It’s the lightest the company has ever produced. That means less heft when you’re wearing the jacket , as  it weighs next to nothing. 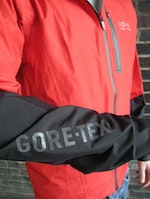 It’s been manufactured using a lighter and thinner version of the Gore-Tex membrane, and the new liner uses a new lamination process to integrate the backer textile directly into the membrane, which allows for the improved breathability the fabric offers. Sweat is better transported from the skin through the new fabric, yet it’s still fully waterproof.

The result is a thinner fabric with greatly improved breathability performance. Compared to other fabrics, it feels much more supple, soft and flexible and non-crinkly. Which means it’s more comfortable next to the skin. Impressive stuff, we think you’ll agree. Learn more about Active Shell here.

The two jackets square up

Arc’Teryx is a Vancouver-based company with a strong reputation for solid durable clothing, and has pioneered a load of construction techniques like bonded seams and water-resistant zips that we pretty much take for granted today.

The new Beta FL isn’t actually a cycling-specific jacket, instead it’s sold as a backcountry ski adventure jacket, but a glance at the dropped tail and other details suggests that it has everything a mountain biker looks for. In fact, other than the hood, we can’t see any features that are missing to make it work nicely on the bike.

Gore Bike Wear’s Fusion GT AS is a proper mountain bike-specific jacket. It’s packed with nice touches that make it ideal for biking, with a good fit helped by pre-shaped elbows and stretch inserts that increase flexibility on the bike and a generous dropped tail.

The Arc’Teryx and Gore Bike Wear are both extremely nice bits of kit that are finished to an exceedingly high standard. There are taped seams everywhere and each are very nicely constructed throughout. Arc’Teryx have gone a step further and added a reinforced membrane around the areas prone to high wear, the shoulders and elbows, using a fabric base on Gore-Tex’s Pro Shell to increase durability, while still keeping the increased breathability of Active Shell everywhere else.

The Fusion opts for a low profile main zip with a shower flap behind, while Arc’Teryx have fitted a YKK Vision zipper with large interlocking plastic teeth, claimed to be more water resistant. There’s no storm flap, such is their confidence in the zipper. So while each jacket appears at first glance to be very similar, they are in fact very different.

Fit is good on both jackets. Actually, make that excellent. The Arc’Teryx has a noticeable tapered shape, it’s certainly narrower around the waist on us, and more generous on our narrow shoulders. The Gore in comparison is a less tapered fit, a little more generous around the waist, and pulled in at the shoulders a little more. Both are slim fit, but with enough capacity to take several layers underneath when you need to layer up in the colder months of the winter. 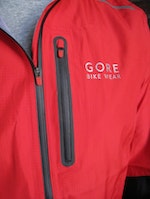 A key feature of Active Shell is keeping the weight low and the features to a minimum.  Both are well under 400g, with the Arc’Teryx nudging 322g but the Gore Bike Wear a staggering 265g, making it one of the lightest jackets on the market that we can think of.

There’s the mandatory features we look for in a mountain biking jacket. Dropped tails on both, even the Arc’Teryx which isn’t bike-specific. The Arc’Teryx has two waist drawcords at the side while the Gore Bike Wear has just one drawcord located around the back, which makes it a little more tricky to get to when you’re riding. Other details include the Arc’Teryx boasts two large chest zipped pockets compared to the Gore’s single pocket, and they’re waterproofed too. Adjustable Velcro cuffs make it easy to reign in the arms.

Now, we’re not really fans of hoods on jackets designed for mountain biking here at Bikemagic. For one, we can’t see the point. You’re not going to wear a hood under your helmet, are you? And when you’re riding, a hood just baffles around behind your head annoyingly. The Gore Bike Wear at least has a pouch built into the collar that the hood can be tucked away into, but the Arc’Teryx has no such provision – you’ll just have to put up with it flapping about.

It’s hard to choose between these two jackets. The Gore Bike Wear is designed for biking, is fantastically well put together – as we’re used to with Gore products – and we like the light weight, the fit and features. The Arc’Teryx does well to tick all the boxes we look for in a mountain bike jacket. It’s beautifully finished and the reinforced panels should see it lasting a long time and standing up to a hard winter.

Which just leaves the price. The Gore Bike Wear costs £220 and the Arc’Teryx is £350. The choice is yours.

Price difference aside, both of these jackets make excellent use of Gore-Tex’s latest Active Shell fabric. They’re possibly the most breathable jackets you can buy, and go a long way to avoiding the dreaded ‘boil in a bag’ sensation that so afflicts many jackets.

For autumn mountain biking, these both tick the box, being light and versatile enough to deal with a whole host of weather conditions. Expensive yes, but they represent a worthy investment, especially if you plan to do a lot of mountain biking in the coming months.

An impressive performing waterproof jacket that is also 100% recyclable

An impressive performing waterproof jacket that is also 100% recyclable

In this roundup of cracking Christmas gift ideas for you, we’ve got a nice bunch of casual cycle clothing from some of our favourite brands