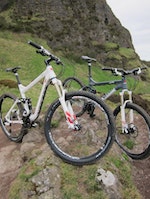 Back in the mists of time Vitus was a well-regarded road brand, one of the most highly respected in the world in fact. During the 1970s and 1980s the brand was pioneering frame technology with such innovations as lugged and bonded aluminium frames.

Much race success came their way. Irish cycling legend and hardman Sean Kelly used to race, and win regularly, on one of the first aluminium-framed Vitus race bikes.

The years passed by and the company hit turbulent financial waters, pushing the brand close to the brink. All was nearly lost, until mail-order giants Chain Reaction Cycles stepped forward three years ago and saved Vitus from quietly slipping into the pages of history. CRC have been working hard these past couple of years to relaunch the brand, with a complete new range of bikes covering road and mountain.

We had to find out more, so we popped on a plane to Belfast where CRC and Vitus are based to take a closer look at this reborn and revitalised brand. They’ve moved quickly since acquiring the Vitus name in 2008, with a nicely rounded out road and mountain bike range. Things are off to a good start.

First though, a quick tour of the vast Chain Reaction Cycles facility (we’ve never been before, and we just had to have a snoop around) and it’s impressive, very slick, very organised. Then down to business, and a chat with the  House Brands team. These are the people responsible for developing the new line of Vitus mountain bikes. It’s clear they’re very passionate about the Vitus name, its heritage and how they want to take it forward. A bit of coffee and some more bike talk, and it’s time to kit up and take a couple of these bikes for a spin.

The range runs to hardtails covering a spectrum of prices, but it’s the two full suspension bikes, a 100mm and 140mm design, that we were most interested in riding. We’ll start with the Blitz 1 (£1675). It’s a 100mm bike using a four bar suspension linkage design, a nice 6061 butted and hydroformed aluminium frame, 2×10 transmission and a 120mm RockShox Reba fork up front. Specifications look good across the board with our Blitz 1 tester costing SRAM X9 groupset, Truvativ finishing kit, Fulcrum Red Power wheels and Schwalbe tyres. Weight for that build is 28.43lbs (12.9kg).

Out of the car park, situated within sight of the grand Belfast Castle, we hit the first of the long steep gravel climbs that tangle around Cavehill. Here we’re duly obliged to exceed the capacity of our lungs as the trail kicks sharply up. Underneath us the Blitz delivers 100mm of silky smooth suspension and nicely controlled thanks to the RockShox Monarch RT shock. There’s little rider induced bob detectable, even out of the saddle efforts reveal a pleasant pedalling experience. 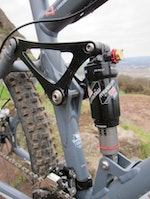 With no scales we couldn’t confirm the claimed 28lb weight, but it felt right on that figure. A mature climber, it felt at home as the trails took on a more challenging nature, with rooty singletrack and a few technical drops to test it. The 67.5 degree head angle, slack for this sort of bike, felt just right.

Reaching the top of Napoleon’s Nose, which rises to 370m, the highest point around here for a few miles (though heavens know why it’s called that because we couldn’t see the resemblance at all!), we caught our breath momentarily and took the chance to admire the view of Belfast, sprawling out beneath us. The impressive new Titanic museum glinted in the distance.

What goes up and must come down, and it was time for payback after all that climbing. Here we jumped at the chance to ride the 140mm Escarpe 1 (£1750), a bike based on the same four bar design as the Blitz. It’s an elegant looking bike, a nicely curved downtube, a dropped top tube and short strut bracing at the seat tube junction and a flared head tube finishing off the smart frame.

The Escarpe is a real hoot to ride. The moment the speed picked up and the gradient steepened, the bike settled into its suspension and propelled through the bumpy stuff with an impressive control. It’s got a nice balance, feels stable and planted at speed and the suspension has a real ‘pop’ to it, you can use it to get air over lips and bumps with real ease. The frame gets a half degree slacker head angle than the Blitz, at 67 degrees, and this felt just right.

Dropping altitude quickly the trail gets a bit twitchier, with rocks, roots and ruts to contend with, all the while the trail getting narrower as we head back towards the castle. Despite these challenges the bike copes just fine, showing its balanced poise even when I take a couple of very questionable line choices. It is a blast to ride (they should have called it the Blast).

The suspension is well managed,a  mid compression tune on the shock gives a nice progressive action. It didn’t get flustered when pushed into tricky situations. It sits nicely up in its stroke. staying taut mid corner and allows you to place the tyres just where you want them. 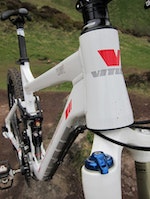 It’s a smart looking bike, contemporary in design. The development team have worked hard on the details however to ensure it delivers a ride they were happy to put their stamp of approval on. The shock selection was made after much careful consideration and testing, to pick the shock that most suited the suspension configuration and rode just how they wanted it to. The geometry has been sweated over, and the guys happily told us they wanted to go for a slacker setup.

Building the bike also shows attention to detail. A 710mm handlebar and 70mm stem shows this. Transmission duties fall on SRAM’s 2×10 setup, with X9 and X7 mechs and shifters. No complaints here. The fork is the excellent RockShox Revelation, complete with a 15mm thru-axle, that during our testing proved to work splendidly and suit the feel of the rear suspension. Is there anything I would change on this bike? Probably not is the honest answer. It’s ready to ride from the box.

So there we have it. Two very impressive full suspension mountain bikes that hit the mark, impressing with good handling, composed and balanced suspension and all the while hitting some good price points.

Grippy and reliable flat pedal from Nukeproof hits the mark

Grippy and reliable flat pedal from Nukeproof hits the mark