One of the new breed of 29er mountain bikes we’ve been most keen to ride this year is the Specialized Epic, the US company’s flagship race bike which has been winning the biggest races since it was first introduced in 2003.

In the intervening nine years, the Epic has been fettled and tweaked beyond recognition, but the unique chainstay mounted ‘Brain’ still features on the 2012 bike. It’s a joint project between Specialized and Fox Racing and is in simple terms an automatic lockout for the rear shock.

An inertia valve inside the small unit is placed as close to the rear axle as possible so it can sense vertical wheel movement. In theory it keeps the shock firm or locked out only until the rear wheel encounters a bump at which point the FSR suspension does its job of soaking it up. 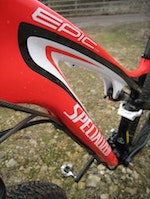 Early editions weren’t met with the highest of praise; the transition between open and locked was too sharp and felt notchy. This is something Specialized and Fox worked heavily on, and several bikes later the system works really well and has been proving itself in world cups recently.

Initial impressions reveal the bike is very fast. And it should be, it’s the choice of the incredibly fast Jaroslav Kulhavy, who chooses the Epic over the hardtail offering in Specialized’s stable. So we’ve got no excuses then.

We’re testing the third tier Comp bike, which at £3,200 is the cheapest carbon Epic on offer. It gets a FACT IS 9m carbon frame with an M5 aluminium rear triangle, 142mm rear dropouts and a RockShox Reba RL 29 fork.

Bolted onto the frame is a SRAM X9/X7 drivetrain and a SRAM S-1250 chainset, rolling on Press-Fit 30 bottom bracket bearings, providing a 2×10 spread of gears. Finishing the bike is a pair of Roval 29 32-hole wheels with S-Works Fast Trak and Renegade Control tyres. Avid Avid Elixir 7 SL brakes bring the Epic to a stop and Specialized branded bars, stem post and saddle complete the package.

At the weekend Maddie Horton won the open women’s 12-hour race at 24 Hours of Exposure. We caught up with her for a chat