Following on from the development of the Big.Nine Carbon Team, a 29er race-ready carbon hardtail launched earlier this year, comes their first full suspension 29er. It’s based on the same suspension platform as the 26in-wheeled Ninety-Nine, a bike that has proven itself on the world stage at the hands of Ralph Näf.

It’s a reassuringly fast looking frame, with very straight top and down tubes giving the bike a good stance on the trail. The 100mm wheel travel at the rear is delivered via a single pivot design, and the 38mm stroke shock driven by a short linkage that pivots at the seat tube. The seat stays wrap around the seat tube, so therefore omitting the necessity for a seat bridge, for maximum stiffness.

We were shown the first aluminium prototype recently; we’re told it’s close to how production bikes will look. Those hoping for a carbon fibre model at launch will be disappointed; it’ll be an all aluminium affair for the first year, with two models offered. Hopefully there’ll be a carbon option in 2014? 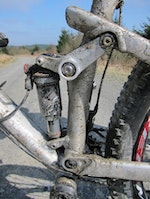 Both rear shock and fork are connected to handlebar-mounted RockShox Poploc levers, letting you easily lockout either end on the move, a feature that no doubt the racers will adore.

We were only given a brief ride on the new bike but instantly we felt at home on it, with geometry feeling good for a fast ride. It certainly carries speed amazingly well, and manages to handle well through the twisting singletrack of our test loop. The 100mm of suspension is well controlled and damped, with quite a progressive feel at the rear wheel, ramping up considerably on bigger hits. It squats down a little through corners, sitting firmly into the mid-stroke, poised for exiting with a burst of acceleration. It feels solid down rooty descents and is engaging for the fast rider.

At the other end of the scale is Merida’s new One-Sixty. Boasting (because that’s the only way we can describe it compared to the Big Ninety-Nine) 160mm at the rear wheel courtesy of a virtual pivot suspension similar in essence to that which Santa Cruz use, but critically with a different axle path. Changes aside, it has a very similar feel to such a bike from the US brand, with impressive suspension performance, whether climbing long fireroads where it’s nice and taut or barrelling down the side of a mountain.

The frame has been on the receiving of a hydroforming machine and the result is a good looking bike. No complaints in the looks department. Nice attention to detail is given to the lower half of the frame, and in particular the rear triangle with a stiffening cross-brace between the chain stays and seat stays. It is an eye-opening experience swapping from a light cross-country bike to a 160mm beast such as this, and the trails we rode weren’t the most suitable for really exploiting the One-Sixty’s potential. What we can safely determine is that Merida appears to have a well sorted long travel trail bike on their hands, with excellent suspension performance and geometry that should win the hearts of many riders in the market for such a bike. A longer ride on more suitable trails is needed to give the bike the shakedown it warrants.

The One-Sixty will be offered with two builds, the 1000 costing £2,500 and the 3000 costing £4,600. We rode a prototype that was built with a specification slightly different to that which will be offered, in particular the Fox 36 fork which isn’t an option. Instead there’s a choice of a Fox 34 Talas FIT 120-160mm fork or SR Durolux RC2 160mm fork.

Earlier this year we chatted to Merida’s head desinger Juergen Falke about the Big.Nine, have a read here.