Bespoked Bristol is the UK’s newest bike show. It’s the only show that celebrates independent frame designers and handbuilt bikes. Now in its second year, having outgrown last year’s location such was the success, we popped along for a look.

While the show is dominated by some exquisite road bicycles, the weird and the wonderful, the beautiful and the strange, there were also a healthy number of mountain bikes on display.  We drove down south for a look around, and the first of our highlights article focuses on the new Cotic Rocket.

One of the reasons for making the trip to Bristolwas for the first unveiling of Cotic’s Rocket. We’ve been following the development of this bike as Cy Turner, the brains behind one of the most loved UK mountain bike brands, has leaked out various bits of news about his all-new 150mm full-susser. The wait was worth it.

Cotic has opted for a steel frame for this, their second full-susser. Using Reynolds 853 main tubes and chromoly seatstays and shock strut, aluminium chainstays and a CNC-machined Droplink a frame weight of 7.3lb has been achieved. 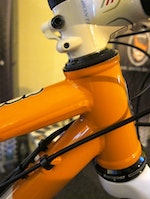 The Droplink is the most interesting part of the Rocket. Cotic have mounted the shock to the downtube, with a shock mounted bonded to the downtube, and is driven from the other end directly by the chainstays. A short linkage, the Droplink, connects to the seat tube and chainstays just behind the shock, serving to keep the rear end stiff and controls the leverage ratio. It’s good too, reckons Cy, “it’s interactive, predictable, has that ‘pop’ to get you up and over things rather than ploughing through and gives much more support in the mid-stroke so the bike feels poised and ready for action.” Here’s a better explanation of how it works.

Also on the Cotic stand (aside from their trusty inflatable sofa!) was the new Solaris 29er. The Solaris is based on offering a ride similar to that found on the popular Soul. It’ll cost £499.

And on the other side of the stand was this lovely Reynolds 931 version of the Solaris. 931 is the very latest tubeset from Reynolds. It sits below their stainless steel 953 tubeset and uses a 17% Chromium, 4% Nickel and Copper mix; making it a stainless steel too like 953, but it’s closer to 853 in character.

931 can be paired with 953 which should make previously very expensive builds a little cheaper, and is easier to work with, and more realistic an option, as we haven’t seen 953 taking off like we thought it might when it launched a few years ago.

We’re going to be riding the Rocket very soon, and we’ll report back with a first ride review and let you know what we think of it.

All-new Quad Link 3.0 suspension design offers improved performance and lighter frame – but are the changes for the better? We find out with a...