Marin has reworked its venerable Mount Vision for 2012, with a new Quad Link 3.0 suspension system, slacker geometry and lighter build, making it a serious contender for the perfect UK all-round trail bike.

Visually the new Mount Vision is a radical step forward. That’s because of the all-new Quad Link 3.0 suspension, which was designed as a result of needing to overcome problems the previous Quad Link 2.0 imposed when penning their first 29er. The subsequent repackaging of the ‘twin links’ suspension has been rolled out onto the 26in-wheeled bikes too.

As well as allowing Marin to bring a 29er to market, Quad Link 3.0 brings other benefits to the Mount Vision; lighter weight, easier shock access, improved shock tune and space for a water bottle.

The new bike loses the traditional elevated swingarm in favour of a more conventional design. Now that the down tube doesn’t have to mount the shock, it can be lighter. And for those people who prefer water bottles to hydration packs, there’s now enough space inside the front triangle to fit one.

While the suspension looks radically different, it still retains the same dynamics as those that have made the Marin such a popular choice for UK trail riders and racers. That didn’t deter the Marin designers from a little tuning, the two short linkages have been modified to deliver a slightly more linear rate in the early part of the stroke, and a little less progressive later into the travel, changes that make the available suspension more usable, more of the time.

Not only is the suspension changed beyond recognition, so has the frame. The new bike looses the traditional elevated swingarm in favour of a more conventional design. A sleeker and lighter downtube, now that the shock mount has been relocated to the bottom bracket area, connects to a short tapered head tube. The top tube has a generous dip for standover clearance. And for those people who prefer water bottles to hydration packs, there’s now enough space inside the front triangle to fit one.

It’s a good looking bike, though not as distinctive as before, we’ll take the improvements in suspension, lighter weight and provision for a water bottle any day.

A classic ride, made better

Bikemagic has always been fans of the Mount Vision. At one time it was one of the most popular bikes spotted on UK trails and was pivotal in converting many mountain bikers to the benefits of full suspension. With its place in the history books confirmed, the company hasn’t rested on its laurels.
It’s constantly evolved over the years to meet the changing needs of modern riders, gaining more travel, loosing weight and getting more contemporary (slacker) geometry over the years.

Any fears the new design would disappoint were quickly banished after a few short miles around the Surrey Hills, the location for our first ride on this new bike. Climbing a variety of climbs proved the Mount Vision still has that mountain goat ability it always had, the suspension proving very supple and active in the early stage of the travel and providing tons of traction. Point it at a rooty steepy climb and it’ll scrabble up with little fuss.

The difference in the suspension feel is noticeable on the descents. Marin’s used to ramp up quite considerably; the changes seemed to have made a big difference in the mid stroke, the upshot being there’s plenty more traction on tap when the going gets fast and rough. It’s a more bottomless feel than previously, but still with the progressive ramp up as you approach the limits of the suspension.

I felt right at home on the MV. The size large tested had a good stretch with the short 70mm stem and 710mm wide bars, giving a great fit right out of the box and feeling right at home on the trails. The geometry now focuses around a 67.5 degree head angle, putting it right in line with other 140mm bikes on the market. 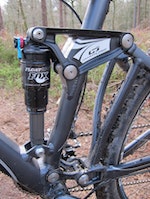 Despite limited ride time on the new Mount Vision, it’s abundantly clear that the changes have all resulted in a bike that is a serious contender for the best UK trail bike. Geometry that works, decent sizing, great specification and improved suspension make it a bike worthy of anyone looking for a competent all-rounder.