With geometry adjusting from 66° to 71.5° and the forks sliding from 80mm to 160mm, partnered with 160mm rear travel, Bionicon’s Alva could be the perfect bike for the person who wants maximum fun and speed on the descents but also wants to be able to ride back up.

Sounds like a recipe for the ideal enduro bike doesn’t it, where you need to be able to climb, reasonably quickly but not super fast, back to the top of the climbs before switching to full travel mode for the timed descents.

Bionicon is a German company who have been pursuing a unique path of a bike that tries that has a split personality, two bikes in one, if you like. An all-out slack 160mm setup with all the poise and bump-taming ability you would expect of such figures, to an efficient climbing rig with a steep geometry that slams the forks travel and makes even the longest climbs as comfortable as its possible to get on a bike that weighs 29.54lbs (13.4kg). 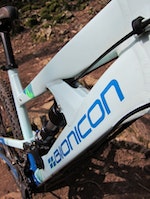 A button on the handlebar activities the clever trickery that alters the forks travel, from 80mm to 160m, while the rear shock, held in place by a special shock mount, slides in and out; these two things are the unique feature that allow such a drastic change in geometry.

I first rode the Alva’s predecessor Tesla last year. The bike is almost identical: a name change was required due to a complaint from a car company that uses the Tesla name,  so the Alva was born. While the fundamentals of the bike remain unchanged, there’s a significant change up front, with a heavily overhauled fork for 2012. Other changes include ISCG05 mounts and post mount rear disc tabs. That new Double Agent TA fork gets a 15mm bolt-thru axle, a gripe with the bike when we rode it last year, and bringing it inline with current standards. And at the top of the stanchions are grease ports that allow for easy maintenance, which you can do at home without any specialist tools, other than a grease can, of course.

It takes some time to familiarise yourself with the Alva. I don’t feel at home right away. Spinning around the car park, the difference between the two settings is so dramatic and eye-opening, it takes a little time to get used to. It’s really like riding two completely different bikes; one minute your high and over the bars, the next you’re sinking into the suspension as the fork rakes right out.

Riding away and onto the trails and the bike comfortably settles into the first climb. It takes a little out-of-the-saddle weight shifting to get the bike into the steep/short travel setting, and then I’m away. It’s a planted feeling bike, the huge fat tyres audibly dragging on the road. The steep angles make the climbing less of a chore though, and before long, the top is reached.

Pressing the little blue button and ‘whomph’ the bike slackens right off. With the forks now delivering 160mm travel and the geometry at its most extreme setting, the bike feels ready for the descent. And it sure is. Barrelign down the grassy track covered in lumps and ruts, the Alva simply blasts over everything with the assured confidence I’d expect of a 160mm bike.

The fun is soon over, and it’s into another climb. Press the button, steepen the angles, and away we go. The new fork is as silky smooth as I was expecting, based on my previous ride, and is as stiff as anything else out there. It suits the rear suspension well which offers a bottomless feel with impressive ability to smother the small bumps and take on the bigger impacts, boulder fields and square edged hits.

It’s an interesting experience riding the Alva. It works, pure and simple. If you want to relish the descents but don’t want to suffer the slack angles on the way back up, the Alva is the bike for you. It’s not the best looking apple out there though, but the more I rode it the more I warmed to its ‘agricultural’ looks. The perfect enduro bike though? I think it might just be.