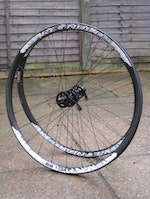 For the past couple of months we’ve been riding the brand new Reynolds XC 29 carbon fibre wheels. Here’s our first ride impressions:

Unlike some wheelsets, Reynolds develops and manufacturer the carbon fibre rims in-house, there’s no outsourcing here, which has obvious advantages. Chief among them the fact the designers can produce a rim profile and build exactly to their desired specifications.

The rim is after all the most important part of the wheelset. Reynolds hand builds each rim using continuous fibres of carbon, allowing a precision to the layup that contributes to their incredible build quality. 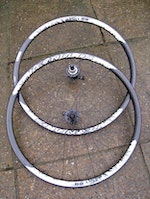 The most notable difference to the previous generation of mountain bike carbon rims is the width they’re 28mm when measured externally, with a 21mm internal width. This allows the rim to be much stronger and also offers a better platform for wider tyres to be seated. That means they’ll take 2.35in tyres in their stride and even handle 2.5in no problems.

Reynolds own design hubs are laced to the rims with DT Revolution spokes, 24 front and rear in a 2-cross pattern. The new Reynolds quick release levers are a big improvement on the previous design levers, and not only look far better but are nicer to use. Included in the box when they arrived for testing were tubeless valves and adaptors for converting the front hub to 15mm bolt-thru and 10mm thru-axle on the rear.

The extra width and chunkiness of the rim gives them incredible strength and stiffness. I swapped the stock aluminium wheelset on my Scott Spark 29er test bike for the XC 29 set and the difference was immediately noticeable. Acceleration is much more instantaneous, with a noticeable increase in corner exit speed. Flinging the bike through the trees also reveals a sharper, more focused sensation, the stiffness of the wheels injecting more life into the bigger wheeled bike. There’s less of the vagueness felt with the previous wheelset, a precision replacing the lag that previous wheels were afflicted with.

One of the criticisms some people level at 29ers is directed at the wheels. The larger size has obvious implications on the stiffness. The Reynolds are a big improvement in this respect, improving handling so much that, when it came to sending them back and fitting the original wheels back into the Scott, the ride felt soft and lifeless. It was then that I really felt the difference, the improvement, the Reynolds offered.

So far then, we’re suitably impressed. We need to do some more riding before we deliver our final verdict.

We chatted to Aaron Packard, the Design Engineer at Reynolds, about the design and construction of the wheels. Read that article here.

The Simple was Cotic’s steel singlespeed offering, but for 2012 it’s been overhauled and now sports a pair of 29in wheels

The Simple was Cotic’s steel singlespeed offering, but for 2012 it’s been overhauled and now sports a pair of 29in wheels

29er versions of the Core and Latitude shown for the first time, as British brand increases its offering of bigger wheels

Saracen is banking on 29ers with two hardtails due for release later this year. Plus a cyclo-cross bike designed for mountain bikers