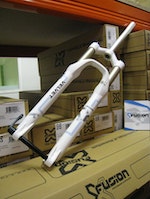 While down at Sussex-based distributor Upgrade Bikes last week (who look after Kinesis, DMR, Lezyne and Reynolds) we had a nose around a huge pile of boxes containing the latest suspension forks from X-Fusion.

X-Fusion are new on the suspension scene, but they’ve actually been around for quite a while. Now that Upgrade is bringing them into the UK, expect to see a lot more availability which, based on our first impression the other day, can only be a good thing.

We looked at two key models in the range, the 140mm Velvet and the 170mm Vengeance. The Velvet interests us. Firstly prices start at just £329.99 which, in an era when suspension forks cost nearly a grand apiece, seems like startingly good value to us. If we hadn’t been told the price when we were checking them out, we could have sworn there would have been some bigger numbers involved.

They’re really nicely finished too. Everything is exquisitely machined, especially the adjuster knobs which smack of attention to detail. The casting of the lower legs looks first class, and the paint and decal finish is right up with the offerings from Fox and RockShox. A serious challenger then, they could easily hike the price up if they wanted.

Plenty of options are available with the Velvet, including 9mm and 15mm thru-axle configurations, and a choice of remote or lever actuated lockout and a DLA (Down Low Adjust) travel adjust system.

If you want more travel, the Vengeance packs 170mm, with a handy travel adjustment feature that drops it down to 140mm for climbing. The crown height has been reduced on the latest iteration of the fork to reduce the height of the front end, and the air spring internals have been revised to deliver a more supple and linear feel.

Inside is a twin-tube HLR damper using a cartridge design. The low and high speed compression circuits can be independently adjusted, as can the rebound damping. The fork is also available in a coil version. The Vengeance is priced from £579.99.

You can see the full range (currently only showing 2011 stock) and all the models and prices here http://shop.upgradebikes.co.uk/Catalogue/Suspension

We’re really impressed. For those who want to upgrade their forks but can’t stomach the high prices that most of the contenders are asking for, these at nearly half the price look to offer a serious alternative. We’ve not ridden any yet so how they actually perform in the trail remains to be seen…

See all the 2012 forks at www.xfusionshox.com 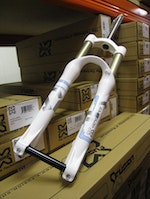 Bontrager mud tyres arrive in time for winter, and they're available in 29er version

Bontrager mud tyres arrive in time for winter, and they're available in 29er version

100mm 29er full-susser from Swiss-based BMC arrives for testing, here’s a shufty at the main features