Winter is nearly upon and ready for the night riding season, Exposure Lights have massively ramped up the output of their flagship Exposure Lights Six Pack light, upping it to 3200 Lumens. That’s up from 2000 Lumens last year. That’s a mighty increase, but it needed to be, there’s a lot of competition in the high-end lights market these days. 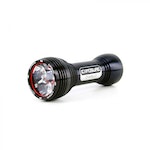 Despite the massive extra increase in brightness, the Exposure Lights Six Pack light is a tiny bit smaller, though it’s still a chunky light. It’s also the same weight as the current model and is the same price too, £399.

Exposure Lights have expanded their novel Reflex Technology to all four lights. The clever technology comprises an accelerometer that senses your speed and adjusts the brightness of the light accordingly. Exposure tell us they have refined the technology so it should adjust a bit more quickly. 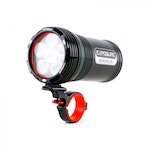 You can read a review of the Reflex Mk2 light, now discontinued, to find out a bit more about what we think of the Reflex technology. http://bikemagic.com/gear/use-exposure-reflex-mk2-lights-review.html

Each light also has a brand new backplate with capacitive switching. Press the silver disc and the whole backplate moves a tiny bit, just enough to change the resistance in the circuit and register the touch. They’ve also updated the small screen to an OLED which gives the displayed information much more clarity.

That’s the new bar-mounted light range. Exposure have also added a cool new feature to their Diablo helmet-mounted light. It’s called TAP technology and after switching the light on with the usual button, you can cycle through the different light modes simply by tapping the light unit.

It only takes a light touch to activate it and is going to be much easier than fumbling for the small rubber button with gloves on during a ride, it’s the cool sort of innovation we’ve come to expect from Exposure.

A great value front light with fuss-free mounting and a beam whose strength belies its compact size.

An incredibly bright and well-made bike light with several innovative features that set it apart from the competition.

A great value front light with fuss-free mounting and a beam whose strength belies its compact size.

An incredibly bright and well-made bike light with several innovative features that set it apart from the competition.

The Lexyne Femto Drive LED lights are a durable, sleek and long lasting “be seen” light.