Electronic shifting has swept the road cycling market in recent years, and Shimano’s Di2 technology, which has proved exceptionally reliable, has officially been brought to the mountain bike world.

But not in a way you might be expecting. Fox Racing Shox’ latest development is to use Shimano’s Di2 electronic technology to enable their new Intelligent Ride Dynamics (iRD) development programme, which the US-based company describes as “for electronic products employing non-traditional solutions to help customers improve their ride experience.”

What have Fox developed then? Float iCD uses the Shimano Di2 battery and cabling to offer electric lockout for the fork and rear shock, simply by pressing the handlebar mounted remote button. Fox describe the two settings  as ‘Climb’ and ‘Descend’, and can be used on the fork only or fork and rear shock simultaneously.

Fox reckon it all makes for easier switching between shock and fork settings, with less effort required to press the button compared to pressing a typical cable lever: “The front and rear suspension are controlled with a single remote switch and activation requires minimal hand movement from the grip, allowing the rider to quickly adapt to sudden changes in trail conditions. The ease of use and very low remote activation force equals less rider fatigue and encourages increased use over other systems.”

What do we make of it?

So, it’s a glorified fork and shock lockout, then? It does seem a bit disappointing that the countless hours of development, testing and production have produced a product that so few people will actually be hankering after, in our opinion. We’re all for progress, but cable actuated lockout levers work pretty well already, for the rare occasions we find ourselves reaching to lockout the forks/shock – something we’ll admit happens rarely.

Plenty of negatives spring to mind. There’s the expense for starters weighing heavily against it. The weight penalty; you’ll be lugging around a battery just to lock your forks out on average half a dozen times per ride or race? Maybe more or less. There aren’t any mountain bike frames on the market with drillings to mount the battery. And there’s the visual appearance of it, the large device strapped to the shock – it’s hardly appealing.

Looking into the crystal ball

However, as a little glimpse into the future, it’s an exciting day. It doesn’t require too much daydreaming to imagine a more intelligent use of electronic technology. Stored shock and fork settings for trail conditions perhaps? It’s just the tip of the iceberg.

Weight for a Float iCD fork with a FIT damper and Kashima coating is a quoted 1,555g (3.43lb). The same fork and Factory series shock with a Kashima-coated body and air sleeve is in the region of 1,860g (4.10lb).

The remote switch can be mounted either left or right on the bars, with two or three position rotary switch. The system includes all the hardware; battery, battery bracket and remote switch with three cables linking the system together.

If you’re concerned about the battery life, Fox reckon it’s good for 2.5 months!

Availability is slated for September. http://ridefox.com/ 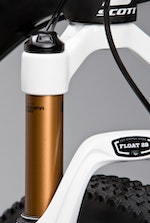 Racing around the clock isn’t easy. Here’s some top advice to help you out

Racing around the clock isn’t easy. Here’s some top advice to help you out

Introducing our new Trail Guide, the ultimate resource for where to ride in the UK. And we start with Coed Llandegla, North Wales