Did you know it’s exactly a week tomorrow when I’ll be rolling down the start ramp of the 2012 edition of theCapeEpic?  I’ll be riding aboard Scott’s newly revamped women’s specific Spark Contessa.

I’ve been training and learning how to mountain bike on their 2011 incarnation all winter and we’ve been getting along just fine. Fresh out the box it’s clear that like their paint jobs the changes they’ve made to the bike aren’t subtle. Retaining only the DT Swiss wheelset and Shimano XT groupset the 2012 Contessa Spark is a race-ready beast with some trick new additions including BB92, adjustable BB height, a tapered head tube and shiny new shock system.

The new shock is introduced across the Scott Spark range. They’ve stuck with a top tube mounted design but the linkage has been moved back and made smaller which makes it much better at transferring the movement from the back wheel into the shock and offering up better traction and improved sensitivity. I can think of nothing better, as the Epic includes several rocky climbs averaging up to 10km. 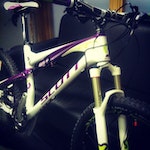 The patented Twin Loc technology is retained but now controls both the rear shock travel and fork lockout simultaneously, one click switches the rear to traction while the fork remains open. Another click and the rear shock and fork are locked out. That’s a pretty simple system for me to get my head around.

The frame gets a dose of internal cabling and rear gear cables get routed along the underside of the downtube this year. The new shock layout and cable routing makes it super easy for me to add a standard bottle cage rather than using a side entry cage as I have to do on most women’s full suspension bikes. 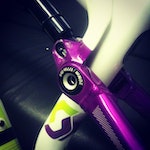 It is hard not to miss the slacker angles on the 2012 bike. Making descending far easier, combine that with tapered head tube, also introduced for 2012 and this bike has got point and shoot stability written all over it.

It comes as a confidence booster for the later stages of the Epic when logical thinking goes out the window. Speaking to the medical teams they told me most accidents happen towards the end of the race when people are tired and stop thinking about how to ride the technical sections properly.

The Scott Spark offers adjustable geometry by way of a shock mount chip in the linkage; simply just remove the chip, flip it and adjust the BB height by 7mm. This in turn changes the head tube angle by 0.5 degrees. It allows the rider to get more clearance over rocks and if clearance isn’t required a lower BB provides more stability and cornering in the tight single track days. I bet I’ll see some Scott team mechanics making changes at the top end of the field the night before the next stage.

The rear wheel is now connected to the frame by means of an IDS-SL dropout system. This works in much the same way as a QR15 arrangement whereby the QR skewer forms the axle of the hub and locates into a secure thread at the other end. The net result is a stiffer system which should reduce lateral flex from the rear wheel (that feeling of front and rear wheel not being connected), not only allowing for more efficient power transfer but meaning that the only movement in the rear wheel will be by way of travel via the suspension. 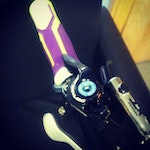 There you have it. More technology than you can throw a stick as all wrapped up around a lightweight stiff carbon frame. A perfect marathon racing machine.

Our final photo gallery from the South African Cape Epic stage race, they're so stunning we just have to share these

Our final photo gallery from the South African Cape Epic stage race, they're so stunning we just have to share these