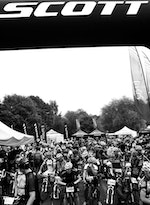 For the second time this year I headed off to Wales to do the Exposure Lights Big Night out event followed by the MTB Marathon the following day. Ruthin was the venue this time and the Marathon series finished with another cracker.

After a pretty brutal experience at 24/12 I took things very easy for a few weeks afterwards before trying to ramp up the training again to build up to the final race before the upcoming World 24 Champs in October (WEMBO). I even managed to dig the turbo trainer out to do some intervals which has been a very rare occurrence this year with most of the miles I do ending up on the road between Bristol and Swindon.

Heading up to North Wales with my buddy Rich I was expecting some big long climbs and wild, fast, flat out descents that have become the hallmark of the excellent marathon series. Ruthin didn’t disappoint starting at 8pm sharp with the ELBNO.

I started off pretty well, more or less at the sharp end of things. The fleeting attempts at some hill repeats in the last few months seems to have paid off with my usual backwards direction at the first sniff of a hill not materialising and actually keeping with the front runners up most of the first haul skyward. Ant White made a nice little gap with a charge off the front and held on to be first man back followed very closely by Roki Read, James Nixon and then Me. Nice to be up there and within three minutes of Ant which is as close as I’ve ever been. I felt strong throughout, pushing on and being able to sustain close to my limit. I just missed out on 3rd finisher with Roki Read absolutely smashing the mega final descent (fair play lad) to overtake me near the bottom and create a gap that I didn’t have the legs/will to make up on the road time trial home, he also then passed James so must have been going some. Some of the descents were so fast that I could feel myself drifting sideways even on relatively gentle bends, big smiles. As per the Builth ELBNO I once again didn’t quite realise how close we were to the end so missed out on a potential sprint off for the finish, hey ho.

My lofty finishing position was partly due to someone else’s misfortune, Phil Simcock took a tumble at the bottom of a grassy descent leaving him with a broken collar bone, Jason stopped with him but my duties to inform the next marshall didn’t really slow me down at all. Heal up well soon Phil! ‘Results’ below.

The boys at Exposure had loaned me some new super shiny new lights, the Toro and Axis the latter of which came equipped with some pretty special new tech ‘TAP’. TAP the light and it changes mode, nice! The Toro also runs the a new display at the back showing battery remaining in hours and minutes so you don’t have to calculate how long you have left on the fly.

After a finishing beer or two, chips, homemade pizza that Rich brought (awesome fodder) it was off to bed. I even managed a 20 second lap of the field warm down to try and help the recovery for the next day. Unfortunately for an unknown reason I couldn’t get to sleep that night so awoke with that horrible feeling of “did I actually fall asleep at all?” uuuuhhh.

Stuffing as much pre race re-fuelling in for breakfast as I dared, the weather was perfect and although slightly aware of some sore legs, I was looking forward to smashing some of the same descents we did the night before in the day light.

True to form an epic firm climb sorted the pack out and I didn’t make a concerted effort to stay at the sharp end but tried to stave off the cramp from the off which I could start feeling to build as soon as I started pushing. I road with Jason Miles and on a big rig that didn’t seem to be slowing him up much on the climbs he eventually cracked on to a pretty respectable position. Looking around it was pretty easy to tell who had rode the night before, some tired looking faces for sure. Serial nutter Ant White showed his good form getting close to Phil Morris as 4th finisher and overall winner of the Rich Sanders ELBNO/Marthon double ‘Bad Ass’ category, he was even talking about doing the whole route again for training afterwards??!!

I had an ok day, patchy feelings of goodness intermingled with some pretty horrible bouts of cramp at around 2 hours in. Once again some prolonged battling with a Clee Cycles rider, in this case Andy Jones took up the mid section of the race but he was able to pull away from me towards the end and despite his bottle being completely dry he didn’t stop at the final food stop where I was in dire need sugar and water so never really got properly back on terms with him.

The course once again was excellently painful. ‘Proper’ mountain biking and hardly any mud, unheard of year round in North Wales. 30mph+ down double track with the odd rocky outcrop is pretty hairy but fun was had all round. The linking road sections to make up the mileage didn’t drag too much and with the steepness of the grassy ascents, were somewhat of a relief even if you were running out of gears to get up some of the steepest road sections.

I finished 14th, pretty happy with that overall. A good benchmark for fitness levels and seeing myself go slowly climbing up the ranks throughout the year is a good indicator that I’m still figuring things out. Not allowing for turnout variations in the three 75k marathons I’ve come 30th, 21st, 14th…or if you like your stats 20%, 14% and 8% off the winning time respectively…getting there 🙂

In some good excel skilling, Rich made the bad ass category for the 75k marathon of those doing the double, some quality endurance skills by the old guard showing us how it’s done once again.

Thanks to Exposure Lights for the loan of the Toro and Axis and to M Steel Cycles for their continued support.

A few weeks back we headed over to the beautiful little Welsh town of Hay-on-Wye. To visit the Hay Bike Fest.

Bike Magic Trail Guide TV takes a spin around the Cathkin Braes loop in Glasgow with Clive Forth.

A few weeks back we headed over to the beautiful little Welsh town of Hay-on-Wye. To visit the Hay Bike Fest.

Bike Magic Trail Guide TV takes a spin around the Cathkin Braes loop in Glasgow with Clive Forth.

Matt Jones brings us a rider's report from the racing at Builth last weekend.