A quick look at some of the highlights from the Bespoked Bristol bike show, held last weekend and which is now in its second year.

Yesterday we took a look at the new Cotic Rocket that aired in public for the first time. Dodgy show lighting didn’t help much at all in getting photos, so apologies in advance! 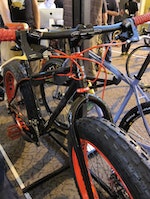 No show, it seems these days, can be complete without at least one fat bike. Here’s the Surly offering. What we can’t understand is where the market for these bikes is. This was our bike of the show, without opposition. Ted (pictured) has only finished welding the 29Gnar at 3am of the morning of the show! There aren’t enough words to explain some of the crazy descriptions of the hurdles and sheer amount of effort and passion that had gone into it. Mounted inside the frame, as you can clearly make out, is a Shimano Alfine gear hub. Such a creative decision is clearly going to present some problems, and that’s exactly the case. Cramming it all in required some ingenious solutions, even to the extent that he machined his own rear hub.

Here he his showing a more polished example of his craftsmanship.

Another titanium rigid 29er, because there aren’t enough out there, but there aren’t many that have a fork as beautifully welded as this one.

Haven’t seen one of these Delta frames for a while. Still manages to stop people in their tracks, as we found when we walked right into the back of someone who had felt compelled to stop right in the middle of the pathway.

Qoroz is a newish UK brand that launched at the London Cycle Show just a couple of years ago. They specialise in titanium frames, with a range comprising road and time trial bikes and. 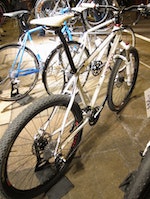 This is Enigma’s steel 26in wheeled hardtail.

But obscuring it on the stand was the company’s brand new Ego 29R ST. We have to admit, it’s one of the loveliest 29ers we’ve ever clapped eyes on. The paint finish is exquisite and the quality of welding is right up there at the top, you won’t find much better, and lovely little details like the guides for the internal cable routing. It’s propped up at the front by a Niner carbon fork. It’ll cost from £1,499.

OK so it wasn’t a mountain bike frame, but this Enigma road frame, perched at the back of the their stand, shows the sort of work they can produce. Gorgeous is the first word that springs to mind.

Curtis bikes are still doing their thing. This was cool bike that has got BMX/pump track written all over it. Or more likely, a bike for pissing around on and trips to the café/pub/watering hole on a lazy Sunday afternoon. They still make ‘proper’ bikes too. This is a lovely 853 hardtail.

And this is the XC9, with an eccentric bottom bracket to tension the chain when running singlespeed in the vertical rear dropouts. While it was a largely UK biased show, Mawis made the trip from Germany, and we’re frankly glad they did: this 29er is stunning. Mawis really don’t do off the peg, in fact when they design a frame, they throw away the drawings so they force themselves to design from scratch every time a frame is designed. Mathias, the man behind the brand, is big on bike fit and went to great lengths to tell how important he felt it was to design a frame exactly to each persons shape. Even details like the kink in the chainstays for heel clearance, which has to be dependent on foot size: that’s attention to detail.

We look at XC tyres including the Charge Splashback, WTB Moto and Michelin Wild'R

We look at XC tyres including the Charge Splashback, WTB Moto and Michelin Wild'R