As part of our month of 29ers we caught up with Santa Cruz and The North Face endurance rider Rob Dean to get his views on these big wheeled machines. 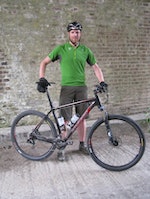 Rob is known for competing on his distinctive Santa Cruz Tallboy 29er (a bike we covered earlier in the series), known as the “General Lee” as well as their Highball hardtail (also covered in our month of 29ers), but Rob has been a convert to big wheels since their inception and was the owner of the UK’s first 29er frame and fork, the prototype On-One inbred 29er (mentioned in our 29er feature from Brant Richards) complete with a rather special prototype 29er USE S.U.B. Fork.

Bikemagic: So, what made you first switch to a 29er bike?

Rob Dean: The physics of it made a lot of sense to me; large wheels will roll smoother and have more traction due to the reduced vertical accelerations offered by the smaller angle of attack, all other things being equal.

Other off road vehicles, such as tractors, solves their traction issues with larger wheels, not just fatter (and heavier) tyres, so why should mountain bikes be any different? It seemed like an excellent solution. Being tall I saw no compromise on bike geometry so I knew this could potentially be an excellent type of bike for me off road.

BM: All other things being equal, what compromises do you, or did you, see with 29ers then?

RD: Well, when they first came out, rims just weren’t available. This limited me initially to narrow and heavy touring bike rims. In turn this limited me to narrower or higher pressure tyres, assuming I could get hold of suitable tyres, which was an issue for the first year or so. However, I loved the bike right out of the box, but this may have been party to do with the extra long 26” top tube which opened up short stems to me for the first time.

Rim width, rim weight and tyre availability are no longer an issue in the UK any more. I soon overcame my initial niggles as, after a year, I managed to get hold of some NoTubes 29er Olympic rims which saved weight, provided a wider rim and allowed me to go tubeless all at the same time which in turn facilitated wider tyres and a lighter & lower tyre pressure tubeless setup. The lighter weight, comparable to a light 26” wheel, was a revelation and really overcame any feeling that may have been described as “ponderous”, “slow to accelerate” or all the other lazy journalist phrases normally pinned on 29ers by the nay-sayers and those who often haven’t taken one for a proper ride.

That being said, I think the single biggest problem a lot of 29ers face is wheel weight. I’m very lucky to have some great support in recent years that has allowed me to build myself some light (<1500g) wheels on my bike, which are coupled to a lightweight tubeless setup, but one set of wheels I owned several years ago on a “ready to race” hardtail, from a brand that shall remain un-named, weighed in at 2.4kg for the bare wheels and this was on a wheel that contained the words “light” and “race” in the name”.

BM: You also mentioned the benefits. You experienced, and overcame, the issues commonly associated with the negatives of the 29er wheel size, but you clearly enjoyed your experience overall, so what won you over so completely?

RD: The traction available was amazing, the bike stuck to the ground on rockier & more technical terrain so much better, allowing faster cornering and lines that I just wouldn’t have got away with previously.

I also was able to match it to a shorter lighter fork up front, giving me a light and efficient bike that I could not just race flat out on the flats with, but that I could use on terrain I would previously tackled with a much longer fork and/or fatter tyre. You can see this now with many 26” bikes being equipped with 100-120mm forks, even for XC duties, whereas the equivalent 29ers in the range tend to come with an 80mm fork. There are a lot more rigid 29ers, and 69ers, out there for the same reason.

A 29er will also have slightly longer chainstays to fit in the larger rear wheel, this also helps keep the bike stable and, for me at least, inspired just that little bit more confidence in the rider. At the time super short chainstays were still all the rage, so this was potentially seen as a bad thing.

Now, with riders doing more with, and demanding more from their bikes, 29er and 26in chainstays lengths can be pretty similar, a positive that 29ers may have unknowingly led the charge in.

BM: You’ve mentioned a couple of geometry points: Top tube & stem proportions and chainstay lengths. You’re a tall guy so 29ers might seem a natural choice for you, do you think 29ers are for the taller rider only?

RD: In one word: No. I think, for a lot of the riding that a lot of people do, a 29er will offer more benefits than compromises that a 26” wheeled bike, no matter what size you are. If you want an 8” travel monster of a bike, you’re probably better off with a 26” wheeled bike as the smaller wheels will facilitate longer travel and fewer geometry issues to overcome, but this applies if you’re 4’7” or 7’4”.

However, most people want to ride in their own back yard, maybe in the UK national parks of the Peaks, Lakes & Snowdonia and in the large number of excellent trail centers we have in the UK. For this a 29er will offer a better bike and allow you to cover a greater distance with a faster average speed. Again, I would not caveat this with any rider height recommendations.

When looking for smaller bikes, rider height is not the issue I have come across though, so much as the availability of either frames or bikes to fit smaller riders. The Trek world cup women’s team are all tiny and they compete, very successfully, at the very highest races on the world cup XC circuit, showing that 29ers can be ridden and ridden fast by anyone, no matter what height they are. There just are not the bikes out there to suit the shorter riders, or not that I can find anyway.

I am not a frame designer, but hopefully this is an economies of scale thing, not a geometry issue, and I understand that trying to make a new frame to suit the “new” 29er wheel size, for a minority of riders, can be hard.

My girlfriend is 5’3” and is starting to do the occasional race [when he says “starting to do the occasional race”, we did note that she won SITS last year in a mixed pair with Rob! – ed.] so I’d love to get her on a light 29er, but we’re going to end up on a lightweight 26in full suspension bike simply due to the range of available frames. By this I specifically mean top tube length, as even the smaller 29ers that I have found often have the same or similar length top tube as the 18” frames in the range.

Thanks Rob, fingers crossed light enough wheels and a full range of frame sizes, facilitating access to the benefits of the 29er to yet more riders comes to the UK sooner rather than later.

You can read more about Rob and his bikes on http://bigrobracing.co.uk and @bigrobracing

We get an exclusive first looks Cannondale’s brand new 29er, here’s the details in a video chat with Murray Washburn

The Canadian athlete told us last year he would never ride a 29er. Last weekend he raced a 29er + is that Shimano Di2 battery?