Mavic has expanded its range of clothing, since the wheel manufacturer first expanded into apparel a couple of years ago. The new items, pictured here, included updated jackets, winter boots and a new helmet.

Pearl Izumi has some really nice new mountain bike shoes, including these cool crossover boots. Ideal for the casual cyclist who doesn’t want the odd looks or massive stiffness of a typical race shoe. Wouldn’t look out of place down the pub these too.

Pow is a snowboard company that has turned its expertise to mountain bikers for the past couple of years. It’s got a really nice range of well designed gloves, with details and touches that help them stand out, itself no easy feat in a crowded market.

Their mantra is that their stuff is built to last, and that certainly appears to be the case when you take a look at the high quality level clear from our brief inspection. Here’s what Fox wants you wearing next year. Am I alone in really liking the shorts? Even though I know too well that they’ll never be that colour again after one typical ride in the winter. 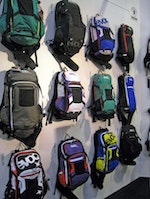 Evoc had one of the most colourful stands at Eurobike, with the walls of its booth adorned with its full range of packs.

Next up is the Rime, a new shoe that blurs the line between XC race shoes and all-mountain/freeride footwear. A Vibram sole with a lightly treaded pattern is good for walking in but there’s enough stiffness for earnest pedalling. Two Velcro straps and one Boa dial keep the shoe in place.

Specialized unveiled the S-Works EVO mountain bike shoe. It takes everything we love about the current (and unchanged) BG S-Works shoes, but as the EVO tag suggests, they’re designed to be a little more rugged with welded reinforcement sections. Load of new Fox gloves and new colourways to look forward to. We like. Craft is pushing lightweight with its Performance Bike Featherlight jackets. Grab a load of the fabric in your hands and it’s the lightest, thinnest material you’ve ever felt. Despite this, Craft say it’s full windproof, and is the ideal jacket for the autumn and the seasons unpredictable. conditions. These are a new pair of light trail baggies from Craft, which I really like. Even in this colour. But don’t worry, other colours are also available. Gore Bike Wear have used the latest Gore-Tex Active Shell fabric, claimed boldly by the company to be the most breathable weather resistant fabric ever developed, in this new £220 Alp-X jacket. Gore Bike Wear is an ambitious company and nowhere does this show better than in its new Fusion Shorts+, which have been developed to be the ultimate baggy shorts, the company tells us.

The shorts are packed with details. A lightweight fabric with abrasion resistant material in the saddle area, a removeable inner short with Power Man padding, and a cut that allows for maximum freedom of movement. The shorts are dotted with mesh inserts with zipped ports for adjusting the amount of ventilation.