Road brand Pinarello (supplier to the Team Sky) have confirmed they are getting into the mountain biking world with the release of their first offering, the Dogma XC 9.9.

Pinarello reckoned there was no scope left for innovation in the humble hardtail until they decided to enter the market with what they describe as a “striking example of innovation”.

Key to this innovation is the ONDA XC Asymmetric Twin Arms, the company’s unique rear triangle design. The seat stays clamp to the seat post at different points above the top tube. This, they claim, better dissipates vibrations across the larger surface area the design offers, giving the frame a “comfort without rival in a hardtail mountain bike without losing responsiveness.”

Bold talk, certainly. Another move they claim is a “break with tradition” is the mounting of the rear disc brake inside the rear triangle. We can think of several bike models that already do this, however…

The frame is an all-carbon construction, using 60HM1K by Torayca with Nanoalloy technology. We’re starting to see the use of nano technology in carbon fibre increasingly as manufactures look to refine frame design and reduce the weight ever more, and the resin is an area they’re focusing on.

When making a carbon frame, resin is used as the bonding agent to keep the carbon fibres stuck together. The resin coats the carbon and there needs to be no gaps to ensure structural integrity. Using a resin enhanced with carbon nanotubes gives the resin an improved strength-to-weight ratio. 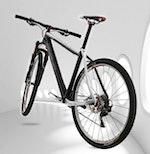 Other details include a four-bolt seat clamp mounted directly to the seat stays. ForkStopper technology protects the downtube from impacts and, as Pinarello haven’t curved the downtube for fork clearance, for reasons of “correct geometry” it’ll also protect against the fork whalloping into the downtube.

The new Dogma XC will be on display for the first time to the public at the Granfondo LaPina which takes place in Treviso, Italy on the 15th of July.