Just arrived from Hotlines UK is this Lapierre Zesty 714, sent down for test last week. We’ve been out riding it, but before we share our riding impressions, here’s a quick first look at the vital stats.

The Zesty has for a good few years been one of the most well received on trails across the country, so clearly any changes they wanted to make to the bike would have to be well considered. Changes then are subtle and focus on three areas; suspension, geometry and weight.

There’s an updated OST+ suspension, the shock cradle has been shifted higher up the down tube and there’s a short strut between the lower shock mount and the new carbon linkage. This gives the 140mm travel a suppler feel in the early stage, a but tighter in the middle and more progressive when you reach the limits.

Second, the geometry has gone slacker. They’ve lopped a degree from the head angle, so it now sits at 67. That brings it inline with most other 140mm bikes on the market; it seems this is becoming the standard head angle for bikes of this nature. The chain stays have also been nipped in a little.

And the carbon frame has been updated, bringing about weight savings over last year’s model. Up front is a tapered head tube, cables are now routed internally with neat plastic covers at the entry and exit ports, and there’s provision for a dropper post, should you want to add one later. The linkage that drives the shock and serves to stiffen up the frame is now made from carbon fibre.

Setting the rear suspension up is a doddle, thanks to the neat sag indicator printed at the top of the seat stays, with a small clip attached to the seat tube letting you easily see where you on the scale – from XC to freeride – while sat in the saddle.

The 714 is one of three carbon fibre models, sitting in the middle priced at £3,599.99. For that you get a frame dripping with Shimano SLX/XT components, a triple XT chainset, a Fox Float RL FIT 140mm fork, Fizik Gobi saddle, Easton EA70 wheels with Hutchinson Cougar/Cobra 2.2in tyres, Formula RX1 disc brakes and a smattering of Lapierre branded finishing parts. Quoted weight is 25.57lbs (11.6kg). Positive changes then that should go down well with people looking for a well sorted 140mm trail bike. But that’s enough waffling for now. We’re off out to ride it, we’ll report back very soon with some riding impressions. 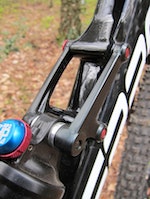