It seems like an eternity ago that Shimano released the DX M636 pedal, a design so obviously simple that you wonder why no-one else thought of it sooner. The big red pedals combined the advantages of SPD and flat pedals, and unwittingly launched the concept of the platform SPD pedal.

Many design iterations later and we arrive at Shimano’s newest incarnation of the platform pedal, which is gaining fans with ‘trail’ riders who want race-bred lightweight components endowed with a little extra burliness. First released with Shimano’s XTR groupset and since trickled down to XT level, we’ve been testing the XT PD-M785 SPD Trail for the past few months, and to say we’ve been impressed would be an understatement.

The bigger platform makes locating the pedal far easier. That’s something especially useful on fast downhill runs where you might want to get your shoe clipped out and clipped for foot-out sketchy corners and steep drops, the platform makes it a doddle to located the pedal when your attention is elsewhere. Not once did we have a problem with clip-in, even when we were in a rush.

Clipped in and riding the difference is noticeable, with a considerable improvement on how supported the shoe feels. I tested the pedals with carbon soled race shoes and more flexible Five Tens. The extra surface area is appreciated with the more flexible shoes (especially the Maltese Falcon shoes) where speed isn’t your priority, and you want a well supported set up for harder riding.

Cleat engagement is very positive, with a nice audible, and satisfying ‘clunk’. There’s four degrees of float, and the tension can be adjusted with an Allen key. That platform comes with only a slight weight penalty: 408g compared to 343g for the race-ready PD-M780. 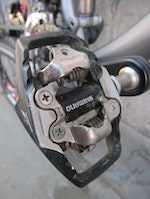 Such is their performance that I’ve even been using them on cross-country rides. Even at the last  XC race I took part in felt happy to use them in preference to my lighter SPD pedals. The weight penalty isn’t all that much of a penalty really, unless you’re a hardcore weight weenie: the improved performance easily offsets the weight.

After several months of abuse through a range of conditions, they’re standing up just fine. No sign of play at all, with the bearings still running silky smooth. If previous XT pedals we’ve used are anything to go by, we expect the reliability to be bullet-proof.

There’s simply nothing to fault with Shimano’s XT Trail pedals. Great performance and value make them the must-buy product of 2012.