After many years out of the sport, Onza is back making tyres, with a new Swiss company revitalising the iconic brand. We’ve recently been blasting a few trails and events on the new Onza Canis 29er 2.25 tyres, here’s how we got on. 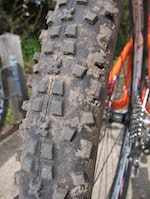 Firstly it’s a two person challenge to put the tyres on. Fitting them to the Sun Ringle Charger tubeless rims required a second pair of hands and an obscene amount of grunting, but several broken tyre levers later, they were on. They also did get easier on subsequent changes.

Once attached and running tubes as opposed to tubeless, we found them to be fast rolling, particularly in dry conditions. Our first blast on them was a long day in Afan, a real mix of forest climbs, open dirt road stretches and tight technical rocky downs, with a nice chunk of flow fun thrown in.

They rolled well on the climbs helping to keep me on top of the gears and maintain pace without the feel of too much drag that fatter tyres can sometimes give, and additionally spinning out well on the longer fire road drags. 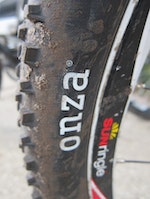 Throw them into some tight singletrack and they behave predictably allowing you to push hard through tight twisty terrain. The front occasionally feels like it may wash out due to the high traction from the back wheel pushing the front through turns, this is a habit of the 29er (perhaps a result of the increased traction surface area of the back wheel) a minor change in your approach to a turn (come in higher and smoother) will see that extra traction pushing you out of the turn rather than over it and/or washing the front out.

The tread pattern consists of openly spaced knobs which clear well in moist conditions. When the going gets very wet they start to slide on an increasing scale however. Durability thus far has been good along with good puncture resistance.

Onza’s new tyres are an impressive relaunch for the brand, and they definitely rate high on the fun scale, particularly on tight manicured bike park trails but equally hold their own on rougher ‘real’ mountain bike terrain.

29er impresses with first couple of rides under its tyres