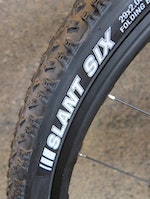 Now that the summer is finally here, itâ€™s time to ditch the heavy winter tyres for some lighter and faster rolling treads. In building up the Tallboy long-termer this week I knew I wanted something fast and reasonably light, the Kenda Slant Six tyres fit the bill perfectly.

The Slant Six is the love child of the well known Small Block 8 and Nevegal tyres, with a tread pattern that has clearly been designed for fast rolling. In use they live up their looks, blasting along hardpack, dried out dirt trails and grassy tracks with startling pace.

A very rounded carcass gives the 2in tyre a large presence in the bike; itâ€™s certainly on the fat side for a tyre of this class. A spread of tightly packed low profile knobs gives a balanced grip from shoulder to centre, giving a predictable transition from upright to leaning over in the corners.

Dual Tread Compound (DTC) places a softer compound on the outer edges with a harder rubber along the centre. Itâ€™s an approach that works well and was appreciated in corners, giving good traction when leaning hard on the shoulder blocks. Lean back over onto the centre blocks and they feel rocket fast: rolling speed on hardpack trails is just phenomenal. 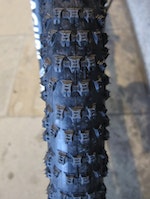 How their durability lives up, especially the softer compound area of the tyre, is something Iâ€™ll need a few months of riding to assess; bu tso far though weâ€™re highly impressed.

At 673g, for these 2in tyres, theyâ€™re reasonably light too. Lighter models are available in the range, which extends to 14 variations, including tubeless and downhill versions.

Provided itâ€™s dry and thereâ€™s little mud to worry about, the Slant Six is a super fast and reassuringly grippy tyre when pushed hard, and the list of options should provide a tyre for all tastes.

Racing around the clock isnâ€™t easy. Hereâ€™s some top advice to help you out

Racing around the clock isnâ€™t easy. Hereâ€™s some top advice to help you out

Introducing our new Trail Guide, the ultimate resource for where to ride in the UK. And we start with Coed Llandegla, North Wales