There’s growing support for 29er mountain bikes for all quarters, and the latest to show their commitment is RockShox, with a massively expanded range of forks for 2012. 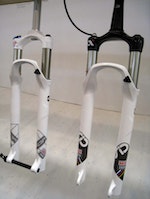 Lighter than just about any other suspension fork out there, the SID is now available for 29ers. It features all-new lower legs with a 15mm Maxle Lite bolt-thru axle option for increased stiffness. Choose the BlackBox carbon crown steerer model and weight is a seriously competitive 1582g. 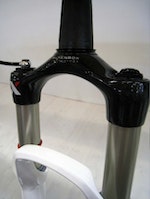 Motion Control DNA, the latest evolution of RockShox’s damping system, first introduced in 2005 on the Pike, features in the new SID. There’s various grades of the Motion Control, depending on your budget, and at the top is RCT3. this damper offers the rider three modes; open, threshold and lock, along wide independent adjustment of low speed compression. While the SID is available with 80/100mm and 120m of travel, the new Revelation ups the travel to 140mm. It’s one of the growing breed of longer travel forks, and signals the next development in the growing 29er movement, long travel all-mountain 29ers.

It’s not just at the top-end that 29ers are appealing, the entry-level is being catered for, and RockShox has the new XC Series 29 fork. 80 or 100mm of travel make it perfect for the growing number of 29er hardtails designed around short travel forks, and the lightest of the two available models weighs 2200g. 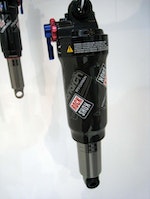 Carbon is the material of choice in shaving some weight on the new Monarch XX Carbon air shock. The 15g air can is half the weight of the aluminium version, bringing the weight of the shock down to 275g (for a 165×38 shock). Aside from the carbon niceness, RockShox has added an XLoc hydraulic remote control that provides instant lockout from the handlebar mounted lever. Borrowing from the popular and well received Reverb seatpost, the fully enclosed hydraulic remote lockout is a first for rear shocks. The benefits are dramatically improved performance and better protection against the elements.