At distributor Madison’s summer show recently, we were given the chance to get a closer look at the latest products from DT Swiss. We previously glimpsed the final production forks and wheels being tested at the Dalby World Cup earlier this year, but now we have more details and prices. 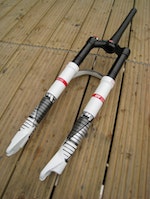 For 2012 DT Swiss is getting into the 29er market with the new XMM 100 29er. It can be fettled to 100mm or 120mm travel and uses the company’s air spring ABS dual-chamber single-valve with either a Single Shot or Twin Shot damping system, depending on how much you want to pay.

Tapered and standard steerer tubes will be offered along with a lighter carbon steerer for the weight conscious. All the forks of course feature the unique Torsion Box, a magnesium lower that is claimed to be the stiffest on the market. Choose from regular 9mm QR or bolt-thru 15mm axles. 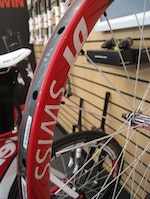 If you’re seriously into cross-country racing, then these new XRC 950T tubular carbon wheels must go on your Christmas list. Weight for the 29er version is just 1,200g. That’s seriously light. I want some.

They’re made this light using a carbon fibre rim designed to tubular specification, more commonly used on road bikes and very rarely seen on mountain bikes. Because you don’t have to design the rim to accept tyres with a bead a far lighter rim can be built, hence the crazy light weight of DT’s latest wheels.

They’ll be available in both 26in and 29er version. The rim is constructed purely form carbon fibre with a 30mm depth and 26mm width, and laced to new 190 hubs.

For those on a budget (that’s us then) the new £399.99 Tricon XM1550-29 is the more affordable 29er option. They weigh 1750g and options include 9mm and 15mm axles and various rear axle setups. They’re tubeless-ready from the box.

Even more affordable are the new XM1800 wheels, which use a tubeless-ready rim (found on the Tricon wheelsetS) but with a standard heavier hubs with a star ratchet drive system and double-butted spokes, for a claimed weight of 1900g.

29ers were the main talking point at this year's Eurobike, with everyone from Ritchey to Caynon launching big wheeled bikes. Plus Charge finally release the...

29ers were the main talking point at this year's Eurobike, with everyone from Ritchey to Caynon launching big wheeled bikes. Plus Charge finally release the...

As if proof were needed of the popularity of 29er mountain bikes, even Italian brand Colnago is getting involved: it unveiled a 29er hardtail at...