Rejoice, the Penhydd trail is back. After closing on 12 April 2010 so the Forestry Commission could cut some trees down, ace trail builder Rowan Sorrell has left his latest mark on the Welsh landscape with a reimagined Penhydd trail. Incorporating a few of the old sections along with lots of brand new trails, the trail opening helps to put the Afan Forest Park Visitor Centre back on the map, after being in Glyncorrwg’s shadow for far too long.

The much-loved Penhydd was always a must-ride trail on any South Wales mountain bike road trip, so its absence was felt, despite the presence of newer trails not that far away. Despite having being created well over a decade ago, the trail stood the test of time, a mark of achievement for the trail builders. I headed over a couple of weekends ago after the new trail officially opened to see if, in redesigning the Penhydd trail, they’ve managed to retain some of the appeal of the original while bringing it inline with modern trails.

Along with the new blue-graded Blue Scar trail, the revitalised red-grade Penhydd trail starts from the Afan Forest Park Visitor Centre. Both start with the same climb: a meandering route snaking up the hillside immediately behind the car park affording magnificent views both up and down the valley. The trail is wide and smooth and the dozens of switchbacks ensure the climb can be ridden comfortably at a steady pace, and it’s not too steep. 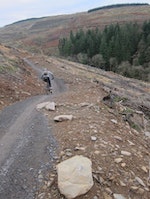 Once you reach the top, the trail plummets down the other side of the hill, and gives you the first taste of the style of the descents that will feature later on in the trail. Smooth turns, fast hips and rollers and a might berm at the bottom exits you onto a fireroad.

This fireroad climbs for what feels like ages and is a real test of fitness and stamina. It’s perhaps a shock to have such a long and steep fireroad climb in a modern trail, we’re so used to quality singletrack everywhere, even the climbs (as ably demonstrated by White’s Level just up the road). There’s 550m of climbing on this trail, and most of it is in these two first climbs. 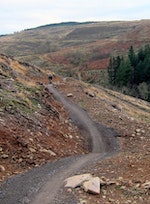 Near the top of the fireroad you have the first split in the trail, the red Penhydd goes left and up yet more fireroad, the Blue Scar goes right and misses a section of singletrack from the top. Make your choice and keep pedalling. Follow the Penhydd trail at this point and there’s a chunk more climbing, before you get to second singletrack section, Desolation. It’s a section that remains from the old trail and and dips and weaves before dumping you out onto another, though short, fireroad climb.

The top of this climb brings you finally to the first of the brand new descents that feature on this reborn Penhydd trail. It’s called Big Dipper and gets it name from the shape of the many berms that dip and roll down the hill, and is about as close to a rollercoaster sensation as you’ll get on a mountain bike. The trail is still bedding in when I ride it, the top layer of rock and mud is decidedly slippery and there is plenty of two wheel drifting through the berms. It’s ample reward for the huge fireroad climb, which rapidly becomes a distant memory.

You’ve got a bit more fireroad afterwards, slightly up and then down, before the trail branches off right into the trees, and you’re into two sections that remain from the old trail; Sidewinder and Dead Sheep Gulley. Sidewinder tucks and weaves tightly through the tall trees, the trail narrow and rocky, the corners loose and frantic. It’s a huge dose of adrenalin, made more fun chasing mates down at high speed. There isn’t much room for error, it rewards precision riding. It’s a good reminder of why Penhydd was such a hit all those years ago. It’s a lot of fun.

The end of the trail deposits you onto Dead Sheep Gulley, a trail that traverses the landscape. It takes more than it gives and after the high of Sidewinder is a bit of a downer. You get the final fireroad climb at the end of this section, quite a steep climb actually, before you’re about to be set loose into the final fling. 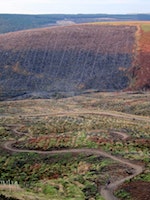 Penhydd saves the best for last. It ensures you’re pretty tired by the time you get there though, but hopefully you’ve enough reserves to savour the desert. You’ve certainly deserved what is set to come. But first, a tricky, but optional, narrow rocky trail called Rocky Rebellion (or you can scoot up the fireroad a few metres) brings you into a series of two sections; Revelation and Tom, Dick & Harry. Revelation hits you hard from the off, with a sequence of rocky outcrops to negation interspersed with fast bermed corners that’ll have you whooping and hollering. Tom, Dick & Harry is similarly entertaining, an entertaining mix of bends and corners that encourage you to squeeze a bit more grip from the tyres and stay away from the brakes to ramp up the speed. You can’t help but grin from ear to ear. You reach the bottom wanting to head straight back up and repeat until exhaustion. It’s fantastic.

It’s clear this has been built with wide trails that focus on smoothness and impressive views rather than out-and-out technicality in mind. It’s not as challenging as the similar red-graded White’s Level, but it does serve as a good stepping stone to that trail, if you want to work your way up.

It’s great to see the return of the Penhydd trail, it certainly adds more scope to Afan and makes starting a trail ride at that car park, rather than the more popular Glyncorrwg, a more realistic prospect, as along with the updated Wall you have several good trails now starting from there.

You can see a promo video of the new trail here

Rachel Fenton: I Just Want the Right to Roam!

Rachel Fenton: I Just Want the Right to Roam!