After the previous weekend’s mudfest at Extreme-sur-Loue, which will henceforth be known as Mud-sur-Loue, the Mountain Trax team headed south like migrating birds to the Cote d’Azur for two races to round off the 2013 season. Here’s how they got on. 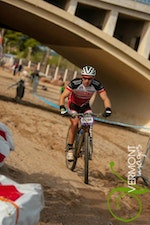 Sitting on the beachfront in Frejus on Monday morning, nibbling croissants, we wondered if the previous day’s nightmare had been just that. The warm sunshine helped to ease tired and weary bodies and erase the horror that had been Extreme-sur-Loue. We had two races at Roc d’Azur to round off our 2013 season, the 84km UCI Marathon on Friday followed by a 55km cross-country event on Sunday. Unfortunately Ben was struck down with a stomach bug after Extreme-sur-Loue, which also affected a number of other competitors. Miraculously I was spared – I’m normally the first to get ill, probably not helped by the germ arsenal my three-year-old brings home from nursery.

As 2,300 hardy souls lined up for the 8 a.m. start it was barely light, it was cold and it was blowing a gale. Much to my amusement I was gridded on the second row alongside cross country World Champion Jaroslav Kulhavy, while Ben was a couple of rows back. Looking behind was not recommended; the pack stretched into the distance, ready to be released and mow down anything that stood in its path. In true Euro style the commentator whipped the crowd into a frenzy with a bit Cotton Eye Joe, the crowd banged on the barriers and then we were off! We thundered down the huge grass start straight before turning back on ourselves straight into a massive headwind. And then everyone stopped! The slowing in pace was fantastic for me, I’m not overly keen on fast starts and was able to move up the outside relatively easily. Ahead lay a makeshift floating bridge across the river, sensing the approaching bottleneck the pack lined out once again and the race was back on. After the bridge and a short, fast road section the race hit the first climb. Steep, loose and dusty and with the pace still on the high side of comfortable it was easy to make a mistake. I was hoping to make up some positions on the climb but the legs wouldn’t respond, so I focused instead on not losing any more! We then headed down a fast, open, rocky descent. At the bottom crowds had gathered to applaud the riders, or possibly just hoping for a big crash!

On the next climb I could see Ben up ahead. Sadly the bug had left him running on empty but I tried to offer some encouragement as we headed into the second descent. This was an altogether different beast. Steep, with loose rocks in wheel-sucking gullies it threaded through thick forest. I temporarily lost any ability to ride downhill, first overshooting a number of loose bends before getting my braking all wrong and slamming into a large boulder… which seemed reluctant to move. My tyre burped loudly in protest, spraying sealant absolutely everywhere. The near miss and the likely painful consequences of my flesh meeting hard rock destroyed my confidence and I was glad when I’d finally, rather clumsily, made it to the bottom. I re-caught Ben on a section of fireroad, but as he’d been unable to hold down food he had little choice but to call it a day. I plugged on and in the second half of the race I got into a good rhythm, catching riders on the longer, more gradual climbs.

As we headed away from the hills my legs were feeling great and I tore down through Frejus towards the beach. The beach section is certainly one of the highlights for me (and for manufacturers of chains and bearings I imagine). Where else can you race across the sand cheered on by the crowd? I cleared the sand section to a big cheer which gave me a big lift.

One of the final sections was on a coastal footpath where the course hugged the cliffs with flights of steps just adding to the excitement. One final beach section and then it was time to smash it back along the bike path to the arena.

In the end I was 26th (in category, 58th overall). Every year the field at this incredible race gets even higher, the French national champion was 24th, which gives some idea of the depth of talent. But the Roc is far more than a race, it has an incredible atmosphere as the locals and spectators really get behind the race. The course is amazing, super tough but its variety makes it such a rewarding challenge. From the port of Frejus up into the mountains and then back via beach featuring rocky singletrack galore on the way. And to round the day off one of the residents of the apartment block I was staying in some 20 miles ago enquired how I’d got on. Her response, chapeau!

A big thanks to all our fantastic sponsors for their very generous support and to John from Vermont Images for feeding us with USN bottles and gels at the feed zones.

This looks like another great stage race that took riders around the Czech Republic earlier in 2013.

This looks like another great stage race that took riders around the Czech Republic earlier in 2013.