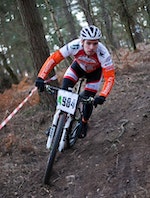 This past weekend was the Gorrick 100 enduro at Swinley Forest. Last year I won the big 7 lap distance and this year I was returning to retain my title, win the race in my new race colours, and test my form ahead of the National Marathon Championships. The 10 mile lap was surprisingly dry thanks to the excellent work of the race organisers who built many of the weather resistant trails in the area.

I filmed a little preview video you can watch here:

Lining up on race day the field was smaller than in previous years, probably due to the recent poor weather putting people off. The numbers may have been down but the level of competition was high, within 10 minutes from the start there was a lead group of 4 which included Tim Dunford, Jamie Newall, George Budd and myself. Behind us were the likes of Ant White, Josh Ibbett, and Jay Horton who were chasing hard.

George and myself rode a strong pace splitting the group, leaving just the 2 of us in the lead. George was attacking the climbs making me suffer but I held on knowing there was only so long he could ride the climbs that hard. Our first 3 lap times were faster than anyone else could manage, including the much shorter race distances; this left us with a decent gap to 3rd place so on lap 4 we eased off the gas. By lap 5 I was suffering from the early pace we’d set but it was clear George was suffering more as he was noticeably slower on the climbs.

On lap 6 George was hurting and no longer able to assist by doing any work on the front in the wind. From this point on he was a passenger holding on for as long as possible edging out a gap on Tim who was still chasing in 3rd. Mid way through that lap the elastic snapped, the gap opened and I was alone in the lead with 15 miles to go. On the remainder of the lap I increased the pace testing my strength and setting a faster lap time than the previous 2 laps. The last 10 mile lap flew past, I knew once I’d ridden the steep climbs on the first third of the track it was almost mission accomplished.

Congratulations to George for finishing second and fighting for the victory and to Tim Dunford who finished third.

You can watch my race video here:

Training has been going well over the last few weeks and this race win gives me good confidence ahead of the National Marathon Championship in 2 weeks time. Before that I’ll be attempting to retain my Southern Championships title at Wasing Park this weekend.

It’s the biggest event on the mountain bike calendar, and is back for its 15th year

It’s the biggest event on the mountain bike calendar, and is back for its 15th year

Stilettos on Wheels kicks off at Birchall

Stilettos on Wheels is the UK's first women-only mtb race, and aims to get more women into mountain biking and racing by providing fun and...

Stilettos on Wheels kicks off at Birchall