Bike riding legend and Bike Magic contributor Paul Aston (instantly recognisable by long hair and excessive amounts of fruit in his backpack) has been living it up with Scott out in Morgins and Chatel, and has come back with the down-low on Scott’s new releases.

Two and a half days riding in Chatel and Morgins was a great proving ground for the updated Gambler chassis and all new Voltage FR. A range of DH race tracks, steep singles, bike park trails, hucks and jumps, all in prime condition early summer season. The matte-blacked Gstaad/Scott Team bus was here, along with Nico Vink and Brendog Fairclough to tow us down the trails and get sideways.

The Gambler looks similar to its predecessor, but Tim Stevens the engineer behind the bike is says that its been fully redesigned from the ground up. ‘We didn’t want to squeeze the bigger wheels (27.5″) in to our existing chassis and compromise the great geometry and handling we had on the old bike, so we redesigned the Gambler from scratch to fit the new wheels and keep the great characteristics that our test riders, racers and consumers loved’

The new Gambler benefits in a few key areas:

It retains many of the old features:

The improved progression curve came from input from Ben Walker, ‘I wanted to create bike that was really easy to setup, and predictable when things get super rowdy’

After setting up the bike with Ben the Scott World Cup mechanic, riding the bike was a dream, instantly comfortable, well balanced and predictable. Sending it in to choppy sections and flat-landing jumps, not once did I feel like I was going to get bucked or thrown anywhere untoward. The bigger wheels, sizing and updated tune all work together in harmony to give the rider huge confidence.

I dragged my heels a few times in berms in the low bottom bracket setting, so spent most of the time in the high position, and I stuck with the standard 64deg head angle as felt I had enough stability in the park, for steep racing situations I would consider using the included  -1 or -2deg Angled cups, but for most of the lift accessed trails in this area I had plenty angle in the front, especially with the added rollover of the bigger wheels.

Grip levels on the Gambler are insane, the low slung and centralised weight matched to the Vertstar Schwalbe Muddy Marys  it was tough to get it sliding. The massive frame stiffness makes it easy to pinpoint the bike in the tech and predictable in the turns.

The high and low settings now share a near identical suspension curve, so when you change from high to low, the only thing that changes is the geometry taking the guesswork out of your bike setup and handling.

The Gambler should be hitting the shops towards autumn, at three price points, the bike here was the top spec 710 model. Using quality parts from in-house brand Syncros, and Shimano Zee in some areas to keep the bikes affordable.

The Voltage FR started life in 2007, a modified Scott Nitrous frame that Timo Pritzel and Lance Mcdermott were hucking around Freeride comps all over the world. This bike was a test bed for the geometry and setup which was taken to the original Voltage, a bike with extensive adjustability to different situations, slope-style, park riding and even winning a World Cup DH piloted by Florian Pugin in 2010.

The new bike offers a massive boost in stiffness, which was a bugbear of the previous bike. Some people modified the old shock linkage to reduce flex and scissoring action in the swingarm. Scott have eliminated this, utilising a one-piece link, adding seatstay bridge, bigger bearings and axles. The bearings are shared with the Gambler, making it easier for shops to carry spares.

Dan Roberts another British Engineer at Scott designed the new Voltage. He says the bike boasts 40% improved stiffness at the BB and 30% at the headtube, impressive changes!

The bike can run 26 or 27.5″ wheels, has the same adjustable wheelbase, IDSX dropouts and Syncros angleset found on the Gambler, travel adjust between 170 and 190mm. It also shares frame sizing with its bigger brother.

This bike is a completely different animal on the trail to the Gambler. More playful and responsive, super low standover makes it easy to throw around in the air, and lighter weight makes it much easier to pick up and place than the Gambler which is a point and shoot destroyer.

I only tested this bike in 180mm mode and was easily capable of everything in Morgins. Dare I say it, it could make a great ‘UK Downhill bike’. It was also clear to see that with some quick geometry changes and smaller wheels that this could be turned in to a sturdy park or slopestyle bike for the trick ferrets and the kids. The Voltage should be arriving in Autumn along with the Gambler.  Again at 3 price points, but a fair chunk of money less. 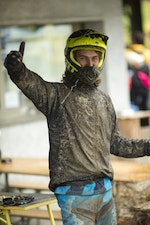 Rocky Mountain's 120mm beast gets an update next year. Looks like a hell of a bike!

The Cycle Show is a massive event and not one to miss. What's even better is that we've got a Cycle Show 2014 Discount Code...

Rocky Mountain's 120mm beast gets an update next year. Looks like a hell of a bike!

The Cycle Show is a massive event and not one to miss. What's even better is that we've got a Cycle Show 2014 Discount Code...

Paul Aston brings us all the news about 2015 Trek 650b bikes and Trek-Penske partnership.