The Merida Big.Nine CF 5000 combines a very light carbon fibre frame with an excellent Fox Float Float 29 CTD FIT fork and slick Shimano XTR groupset and brakes. That sort of kit translates into a bike that weighs just 24lb (10/88kg) so no wonder it provides scorching performance on the trail whether you’ve got a number on the bars or just blasting around the woods for an hour after work.

This lack of mass gives the Merida rapid climbing ability. It simple devours any ascent no matter the gradient. Point it at the climb and up it goes. The light weight, in particular the light wheels and fast-rolling Schwalbe Racing Ralph Evo 29 tyres give startling acceleration from any speed.

It really sparkles at speed. It’s composed and stable at high speeds so it’s quite easy to ride fast. Even on more challenging terrain it doesn’t ever feel out of its depth. It’s quite a stiff frame, and as a result you soon tweak your riding style to work the Fox fork hard. It copes well, being well controlled and damped, and the 15mm bolt-thru axle keeps it tracking well.

Best of all, you can operate the CTD settings with the handlebar mounted lever, so you don’t’ even have to take your hands off the bars!

As with most 29er hardtails, it rips through rough trails at terrific pace. Roots and rocks are handled with aplomb, the bigger wheels noticeably roll over rough stuff impressively well, something I tested by riding a similar carbon hardtail but with 650b wheels during the test period.

It’s safe to say there’s a definite advantage of the bigger wheels if speed is high on your list of priorities. It’s more at home on long sweeping trails and wide open turns then really tight and tree-lined trails where it can become a bit of a handful to weave a fast line.

It’s surprisingly comfortable, something I wasn’t expecting. You’d typically expect to finish any ride on a carbon fibre hardtail by booking an appointment with an osteopath, but that wasn’t the case here. Merida have designed the rear stays to flex and used bio flax fibres in the carbon layup, and it does appear to be just enough to take some of the harshness out of collisions with roots, rocks and ruts. We’re not talking actual flexy suspension here, but a hint of deflection that just takes the edge of impacts.

There is no getting away from the race DNA of this bike. It was developed for the Merida World Cup race team, and as such the geometry is aggressive with a short head tube and long top tube. I found the fit spot on however and it was comfortable for longer rides, so it’d would be a good companion for longer marathon-style events, like a 12- or 24-hour race.

The handling is best summed up as fast and efficient rather than playful and engaging then, it gets the job done but there are more fun bikes available, even in this category. With a shorter stem and wrider bar it can be tamed though, and in this setup it shows a more lively side to its personality and becomes a very good trail bike ridden for fun.

At the core of the Merida is a 2.42lb (1.1kg) frame. That is damn light, it’s nearly as light as some top-end carbon fibre road bikes. They’ve packed it with technology, Nano Matrix Carbon in the layup and Double Chamber Technology, a reinforcing rib through the middle of the down tube, which amounts to a very stiff frame despite the low weight.

It has a short tapered head tube up front and down below a BB30 bottom bracket, with a 12×142 bolt-thru axle at the back, something we’re starting to see more even on race hardtails like this – it offers extra stiffness, desirable in a frame like this, without adding any extra weight. Gear cables are internally routed along the top tube and the rear brake hose is externally routed.

One really nice detail and one that grabbed a lot of attention in the car park before every ride was the carbon fibre seat clamp. It’s about as minimal as it’s possible to get and while it probably only saves a pocket full of grams compared to a conventional clamp, it sure does look pretty. It works just fine too.

The equipment on this bike is impressive, as it should be for the money. It’s mostly top-draw stuff, starting with the full Shimano XTR groupset, including the excellent disc brakes. The brakes are a real highlight, they have a really short bedding in window, and the lever reach adjuster dial is easy to use on the move to get both levels feeling identical.

It’s a shame to see a triple chainset, we’d rather a single or double ring setup as it’s more in keeping with the intentions of the bike. And because it’s so extremely fast, there’s no need for the really low gears offered by the 24t inner ring, you simply get out of the saddle and gun it up the climbs.

It’s good to see a Shadow+ rear mech, the internal clutch mechanism keeps the trail noise down and never once did the chain skip of the chainring. That’s even more reason to ditch the triple chainset, and in reality it would be an easy upgrade, just buy a compatible chainset and you can always sell the front mech on eBay to cover the upgrade costs.

The Fulcrum Red Power 29 XL wheels (previously reviewed on BM) are a stiff partner to the stiff frame, and provide good responses when pushing the bike hard. The Schwalbe Racing Ralph Evo tyres are proven favourites in the racing and fast trail riding world, and in most conditions they offer good levels of grip. Importantly they endow the bike with a very fast feeling over all trail surfaces. They’re tubeless ready too, though the rims aren’t, you’d have to use a tubeless kit if you wanted to go down that path.

An FSA K-Force finishing kit, including the two-bolt seatpost, stem and 685mm handlebar completes the build. These parts are all hewn from carbon fibre, so keeping the weight down, and looking good. The bar provides a tiny bit of flex which offers additional trail buzz damping.

I had no problems with this long and narrow setup, it’s well suited to the bikes intentions of going extremely fast. If I bought the bike I would fit a wider handlebar, say a 720mm riser, and switch to a slightly shorter stem, just to lift the handling of the bike more into the fun category. 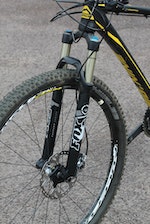 While it may be easy, and rather obvious, to pigeonhole the Merida as purely a race bike, it’s actually a very good trail bike for those that get as much enjoyment out of testing themselves on the climbs and flat bits of the trail, as much as descending. For a couple of hours at the weekend, a 24-hour team race or an hour blast after work, the Merida is very addictive and hugely rewarding.

Dave Arthur puts the 29er, 120mm Cube Sting through its (very fast) pace(s) and comes back smiling. Until he has to look at it.

Dave Arthur puts the 29er, 120mm Cube Sting through its (very fast) pace(s) and comes back smiling. Until he has to look at it.