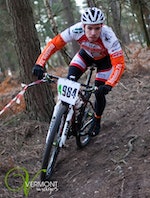 Ben, National Under 23 silver medallist and winner of the Montane Kielder 100 last year, has set up his own race team this year and will be keeping us updated with regular reports as he embarks on a busy schedule of races throughout 2012.

We caught up with him after an impressive win at the final round of the Merida Brass Monkey 4-hour race.

You’ve set up your own team, Ben Thomas Racing, for 2012. How did that come about?

After two years with my former team I wanted to pursue different objectives and decided it was time to move on. Following this decision work began to gather a portfolio of sponsors who could provide me with the equipment, services and support needed for the year ahead. Ben Thomas Racing has no less than 16 sponsors, I’m extremely happy and excited about every sponsor who has taken the decision to join and I’m convinced I now have the best possible support to achieve my goals in 2012.

Since leaving the Mountain Trax race team two years ago the staff at Mountain Trax have worked selflessly to assist my 2010 and 2011 race campaigns in every way possible. Whilst gaining little benefit they devoted time and resources to helping me achieve my goals. For this reason when presented with the opportunity of having them as title sponsor in 2012 it didn’t take much time to make a decision.

Hopefully I can keep the sponsors and public happy with regular news reports, blogs, race videos, and updates on the Ben Thomas Racing facebook page.

Tell us a little about your previous race seasons.

Over the last couple of years I’ve raced numerous rounds of the MTB World Cup XC Series, my favourites being Belgium and Germany. In 2011 I was lucky enough to be invited to ride the London Olympic MTB Test Event.

Last year my biggest win was at the Kielder 100, after training hard through the summer my mind was focused on the top step of the podium. There was some strong competition and the awful weather made for horrendous conditions but after 8 hours I completed the race taking the victory and finishing just minutes off the previous record set in much more favourable conditions.

In 2010 I collected the silver medal in the under 23 National Cross Country Championships which was a huge achievement and something I’m hugely motivated to repeat in the senior category.

You’ve just completed your first race of the season, how did it go?

The first race of the year was the final round of the Brass Monkey Winter which took place this past weekend. First races of the year are always nervous days. No matter how well your training has gone over the winter there’s still an unknown of how your body will cope with racing. It’s only down to the hard work of all 16 sponsors that I made the start line, last year I didn’t get my race bike until early April. Starting the season at a Brass Monkey race has become a tradition for me over the last 3 years since the race series began; these races have always helped me build early season form.

Having missed the first 2 races of the series opting to train through the winter I wasn’t gridded at the start and therefore found myself back on the third or fourth row. Off the start I managed to negotiate my way through the pack and took a wide line around the first left hand 90 degree turn on the fireroad passing loads of people who choose the tight inside line. By the time we entered the first singletrack I had the leader in my sight and sped past at the first opportunity. From then on I kept the pace high edging out a lead over the chasing riders.

My biggest trouble for the remainder of the race was negotiating hundreds of backmarkers and lapped riders which can prove pretty tricky when people are getting tired in a long endurance event. The race course was fantastic fun with miles of twisty singletrack and the patchy blue skies were a welcome sight.

What are you aims for the season?

Following another Gorrick organised race in February I fly off to Spain for the first UCI classified event on my calendar, the Andalucia Bike Race. Following this I’ll be riding the Cape Epic stage race, the British National XC Series, and select Marathon World Series events.

The main goal for the year is the National Marathon Champs in May where I’ll be racing for a podium finish. Hopefully a strong result there and at the Marathon World Series will secure my second objective which is qualification for the World Marathon Champs which takes place in October. My third objective is to defend my Kielder 100 title and break the 7 hour target the organisers have set! 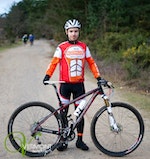 You’re riding a 29er this season. Is that the first time you’ve raced on 29in wheels? How are you finding them?

Over the last few years it’s been great to have the opportunity to test a variety of different bikes including both 26in and 29er wheels. The bigger wheels have always been of interest to me but I’ve struggled to find a frame where the handlebar setup was low enough to use as a race bike.

Fortunately I was approached by Santa Cruz Bike who make a great range of bikes, there were a few different options including the Blur XC Carbon which I’m a huge fan of. However the Santa Cruz Highball was the obvious choice for the marathon style racing I’m targeting with its bigger wheels.

Since Mountain Trax built the bikes I’ve been thoroughly enjoying riding the Highball frame which is light and stiff enough to fly up the climbs, but comfortable enough over rough terrain. The 29er Hope Pro 2 straight pull wheels and Fox F29 forks did a fantastic job of absorbing bumps during the Brass Monkey. During the race I choose the Kenda Slant Six tyres which hooked up well in the dry conditions and rolled really quick.

Look out for Ben’s next blog.

Get set for the return of Grip Shift this April. It's back, new and improved

Get set for the return of Grip Shift this April. It's back, new and improved