Cannondale chose Deer Valley in Utah, an alpine ski resort that hosting some of the 2002 Winter Olympic events, as the venue for the Trigger world launch.

The resort here are pushing mountain biking in the summer and with an extensive network of over 400 miles of trails and plenty of lifts, it was perfect to push the new bike to its limits.

The launch of the new Cannondale Trigger completes the company’s family of ‘OverMountain’ bikes, first launched with the Jekyll and Claymore two years ago. Cannondale told us they would have liked it to hit the market earlier. Sometimes good things come to those who wait, and with the Trigger that is certainly the case.

Think of the Trigger as a Jekyll Lite and you’re in the right place. Borrowing most of the features like the Fox developed pull-shock, BallisTec carbon frame, ECS-TC linkage design and two-bikes-in-one design approach, the Trigger offers 120mm switchable down to 70mm.

The Fox Dyad pull-shock has a shorter stroke and smaller air capacity. Why use a pull shock? Cannondale’s director of technology Peter Denk told us they preferred a pull shock because the design puts less stress and load on the shock bushings compared to a regular push shock, and there’s less stiction too. 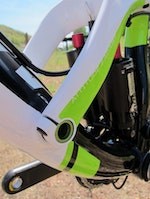 The easy-to-use travel adjust lever is mounted on the bars, and in long-travel ‘Flow’ mode you get the full 120mm.Pushing the lever away from you, when sat on the saddle, reduces travel to 70mm. As well as adjusting the travel, the geometry changes, the head angle varying from 69 degrees in 120mm and 70 in 70mm.

The truth is in the riding – and the Trigger impressed

Long and fast flowing singletrack, open and fast rocky corners, tight rooty tree-lined singletrack, jumps, berms, steep drops – that’s what we had to play on here in Deer Valley. Add a liberal coating of thick dust to the equation and you’ve got the perfect playground for riding. Here any flaw in a bike would be quickly exposed. The Trigger passed with flying colours, surpassing even our most modest expectations.

The Trigger is a killer climber and is fantastically capable on the descents. It rips through the singletrack with accuracy, and the stiffness from the frame can be really felt and exploited for razor sharp handling. The geometry keeps you on your toes and ensures that whatever you put in, you are amply rewarded.

The 120mm travel is smooth and controlled, with a nice linear early stroke that lets it find traction well, useful on the extremely dusty and rocky trails that served as a test loop in Deer Valley. It ramps up progressively at the end stroke so even on some big landings there’s no harsh bottom out.

Flick the lever to Elevate and travel is reduced by the disabling of one of the two air chambers. This dramatically firms the suspension up, forcing the bike to sit higher up and steepens the geometry. This simple change transforms the bike. It fairly flies up climbs, the combination of the low weight, frame stiffness and firm suspension with little bob helping it to slay the ascents.

You might be reading this and thinking there are plenty of 120mm bikes that climb and descend well. The Trigger blows every 120mm bike we’ve ever ridden on the climbs, as it’s like you’ve jumped onto a 22lb 70mm cross-country race bike at the bottom of the climb. It felt composed and fast much like the company’s Scalpel 29er.

So I found myself using the travel adjust lever a lot. Any time the gradient pointed skywards I would flick into 70mm mode to harness its efficient climbing. As soon as the trail got more challenging and there was fun to be had, a flick of the lever gave the full 120mm travel. 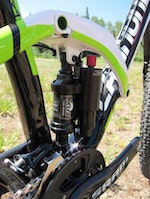 The shock is surprisingly easy to setup, once you’ve got your head around it. Finding it a little firm on our first ride, I took a regrouping as an opportunity to enlist the help of Mark Weir to tune it.

Mark told me that he rides with his Jekyll’s shock set two rider weight levels lower than what Cannondale advise. So we tried the same and, boy what a difference. Previously it was cross-country firm, after the change we had a plush trail bike that hovered up rocky lines, challenging drops and railed fast berms.

The shock allows you to have a plush and mellow 120mm yet when you switch to the Elevate’s 70mm setting, sag is reduced by 40% and the suspension is much firmer for fast and stable ascending. In a way, it really does feel like you can have too bikes in one package. And that’s highly appealing, especially for the sort of trails and riding in the UK.

The Trigger 1 that we rode was fitted with the all-new Lefty fork. There’s some serious changes to Cannondale’s unique fork, which was first introduced 13 years ago. We’ll go into detail in a future article, but the main aspects are its 130mm travel and the use of a new damper that borrows RockShox’s solo air feature. Cannondale use a four faced upper part of the stanchion with rows of needle bearings, which uniquely (compared to regular fork designs) allows the fork to work incredibly well when you’re slamming into rocky corners, turning while dropping off rock steps, and generally putting a lot of forces through the fork. The travel is smooth and controlled, and the chassis is incredibly stiff, handling is sharp.

Attached to the top of the fork is a RockShox Poploc remote lockout lever, but apart from checking to see that it worked, I didn’t find it necessary on the trails we were riding. For certain courses and riders it will be a welcome feature.

After a lung-busting cross-country ride (my lungs don’t work so well at altitude) with the other journalists, Cannondale employees and Mark Weir (who kept us with us on his Jekyll!), I was driven to the conclusion that Cannondale have designed a brilliant trail bike. It’s super fast, stiff, light, and the pull-shock genuinely works and the travel/geometry adjustment is real world usable.

Are the wheels the wrong size?

There were many murmurings after the ride, as we relaxed with a few locally brewed beers, about the issue of the wheelsize. In the US, in particular, the trend appears to be that for hardtails and full suspension bikes up to about 120mm, 29in wheels are the preferred choice. 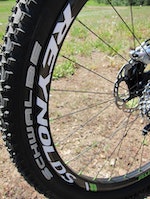 So what are Cannondale launching a 120mm 26in-wheeled bike? Are they attempting to buck the trend, or are they slow to adapt.

It would appear it’s a little of both. Cannondale told us they wanted to complete their OverMountain range with a choice of three 26in bikes sharing the same technology. They admitted they would have preferred to have gotten the Trigger onto the market two years ago, but what with one thing and another it didn’t quite happen.

So it was with some shock that over dinner on the final evening of our stay, Cannondale threw a Trigger 29er in front of us. Queue collective surprise and jaws hitting the floor, and some frantic Tweeting from some journos. We weren’t allowed to take any photos of this bike, but as it’s scheduled for launch in September, you won’t have to wait too long. It looks like will have a slightly different angle of focus than just being a big wheel version.

Does the Trigger 29er then render the Trigger we rode pointless? It would be easy to assume so. However, having ridden the Trigger and been blown away with how good it is, it would be a shame if most people were hasty in overlooking it for the 29er version.

Because not once when riding the Trigger 26er did I find myself wishing I was on big wheels. In fact, I would go as far to say it was al the better for it. And there’s something I wasn’t expecting to conclude.

I rode the Trigger 1, the middle of the three model range. Each has the same carbon frame. This model weighs in at 10.8kg (24lbs) with SRAM 38/24 chainset, Shimano XTR ShadowPlus rear mech and Trail brakes and XT shifters. A highlight of the package are the Reynolds AM carbon fibre wheels shod with Racing Ralph tyres.

The Trigger 2 gets a more modest spec. And for Europe only the Ultimate which will use exotic components like ENVE carbon wheels, carbon Lefty, Hollowgram cranks and XX drivetrain and XO brakes.

The Trigger will be coming to the UK this autumn.