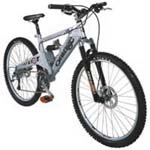 Orange’s first attempt at a long travel downhill bike was a disaster. We know. We spent a whole day trying to ride the thing down one of our local test tracks. The 628 had a bottom bracket height somewhere above cloud level, a weird linked braking system and forks with no oil in them. It was awful.

With the signing of the Animal Playstation team, Orange had to develop a bike fit to compete in world class competition in a very short space of time. The Mr 0 was the result, and though some may have considered it over built, it lasted a season under riders who show little respect for metal fatigue limits.

With its 7.5in of travel, Mr O wasn’t designed for the more rolling DH courses particularly found in the south of England. It was hopeless cross country and took too much energy to get off the start line for a slalom. Patriot was designed to excell in all those areas, and be triple-chainset able for the thrill seeking big-hit rider who doesn’t mind pedalling a few extra pounds for a plusher ride.

That’s the theory. The practice seems to bear it all out though… We rode the Patriot in both it’s guises. With it’s saddle low and fat tyres as you see here, and with a more XC attitude to it’s set up. It works. Complaints centered around the narrowness of the Supercross bar (easily fixed), but the bike pedalled, climbed and generally rode around fine.

Throwing it down some rocky steep stuff, the absence of dual crown forks was noticeable, but the Manitou Xvert Es did their stuff well, shrugging of bigger hits than we thought most single crowns would take. Fox’s Vanilla twin clicker shock is the standard by which other shocks are judged. We’d have fitted a softer spring than 550lb one our bike came with (we’re fitting a 450 for tommorow), but travel was good, with the option of increasing the progressiveness with a bolt-fiddle at the front.

The monocoque downtube that was first seen on the Ms Isle keeps everything stiff and strong without the need for ridiculous bracing tubes everywhere, giving the frame a simplicity which belies it’s strengths.

All up, a superb bike, which runs well out of the box and can only get better with tuning. It’s just a shame about those bars