Big-wheel specialist Niner has just announced news of its updated Air 9 and E.M.D. 9 frames for 2012. 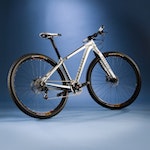 Air 9 gets lighter and stiffer

The new Air 9 hardtail frame gets a new 6000 series aluminium tubeset replacing the Scandium previously employed, a change which allows the company to make a frame that’s stiffer and lighter through extensive butting and hydroforming.

The use of hydroforming has meant the designers can shape the tubes and optimise strength and stiffness in key areas, and improve the ride feel. Niner use a multi-stage hydroforming process: a butted tube is fully enclosed in a die, then pressurised with hydraulic fluid causing the aluminium to expand and taking the shape of the die. This process, says Niner, process allows better control of wall thickness and more flexibility in cross sectional shaping over mechanical forming.

Other key changes centre on the introduction of a tapered head tube, bringing the Air 9 right up to date, and increasing the ride stiffness of the new frame significantly. This also allows a larger diameter downtube along with a fatter top tube, both contributing to a frame that won’t twist under extreme loads.

Out back the chainstays, seat tube and seat stays have been heavily manipulated with hydroforming to create a stiffer swingarm. There’s now a Press Fit 30 bottom bracket to further decrease weight. The result of all the changes is a lighter frameset, which at 1661g is 112g lighter than the outgoing frameset.

Another benefit of the new tubeset is that Niner can now offer a range of anodised colours.

The company’s entry-level 29er hardtail has been redesigned too. A custom hydroformed tubeset, reshaped downtube and tapered head tube with an internal zero stack headset, combining to create a new frame that’s stiffer than the old model.

The E.M.D. 9 sees an update to looks as well, with the new aesthetics reflecting the flagship bikes in the Niner lineup, and now including a Black Anodised option for those seeking the lightest, most rugged finish. Carried over from the previous frame is the standard bottom bracket, while details like the stainless steel Niner headbadge remain.

With several new shoes from Northwave for 2012 on offer, we take a first look

Lea Denison shows us his stunning Niner Air 9 Carbon, which with a dash of bling and a sprinkle of carbon, weighs very little

With several new shoes from Northwave for 2012 on offer, we take a first look

Lea Denison shows us his stunning Niner Air 9 Carbon, which with a dash of bling and a sprinkle of carbon, weighs very little

Race-ready shoes from Shimano prepare to hit the trails

SRAM Grip Shift is back from the past

SRAM has just announced it is to bring back Grip Shift

SRAM Grip Shift is back from the past