The Genius has been in the Scott line-up for many a year now but for 2014 the bike got aa significant update with 27.5in wheels and Fox suspension. This here is high-end Genius 700 Tuned, the 150mm travel sibling to the 170mm Genius LT.

While the LT might look on paper to be the more suitable ‘enduro’ model of the two, the shorter travel Genius is in many ways a more tightly focused all-round trail bike for the majority of UK trail riding which generally involves plenty of climbs.

The frame, all made from HMX carbon fibre, has the now familiar Genius look with the custom Fox Nude CTCD shock nestled under the top tube and driven by a short linkage pivoting off the seat tube. Yes, out goes the DT suspension of previous years and in comes a new custom tuned Fox setup. Scott’s unique TwinLoc handlebar remote controls both the rear shock and Fox 32 Float fork at the same time, offering three modes; Climb, Traction Control and Descend modes. The climb mode is nearly locked out, traction control reduces the air volume, and descend is your full fat full travel model. The remote is easy to use but does take a short period of acclimatisation.

Not only have Scott worked hard on developing the suspension, they’ve also sweated the geometry details which on paper looks to gave the Genius a good shape. There’s a bit of adjustability built into the bike, the lower shock mounting hardware can be adjusted to alter the geometry by changing the chip between high or low settings. In low setting the head angle is 67.9 degrees, seat angle 74 degrees, the wheelbase is 1179.9mm, chainstays are 439mm and the top tube is 624.9mm.

The Tuned in the name refers to the fact this is the top-of-the-range model and the suspension is been configured to be firmer than the other models, because it’s aimed at racers and trail riders who are very demanding. It’s akin to an AMG version of a regular Mercedes-Benz: faster, firmer and more fun.

This model, which does cost £6.5k, is suitably well adorned with some very nice and light kit, including a SRAM XX1 drivetrain and Shimano XTR disc brakes. There’s carbon fibre in the Syncros rims and handlebar too, all helped to shed the weight. Tyres are a combination of Schwalbe Nobby Nic and Rocket Ron, ideal for the current dry trail conditions, and Syncros supply the carbon 720mm handlebar and 80mm stem.

First impressions based on a quick lunchtime ride are that it is a blistering fast ride with the sort of pace up the climbs and out of corners that we’d expect from a race bike, not a trail bike packing 150mm of travel at both ends. The shape and length on this size large feels good through the corners with good stability and poise when lining up through a succession of tight corners.

It’s a stunning looking bike, aesthetics clearly something Scott have clearly worked hard on in recent years and it’s paid off, this is a very desirable looking bike. It’s a real head-turner out on the trail too, I’ve had people stop and ask me about the bike a couple of times too, which doesn’t normally happen on test bikes.

The weight is sub-25lb or thereabouts with pedals and Reverb dropper post which for a bike packing 150mm of travel, is crazy really. That weight, well lack of weight, is something you notice straight away. Going from a 31lb Trance to the Scott revealed incredible acceleration, as you would expect. It’s cross-country race bike fast, you could race this bike I reckon.

Yet that lack of weight doesn’t seem to have an adverse impact on the handling through high speed sections and techy stuff. Instead it lends the Genius a delicate poise, you can move it around underneath you with great precision. Riding a bike with this sort of travel, geometry and low weight is intoxicating, very addictive and a lot of fun. 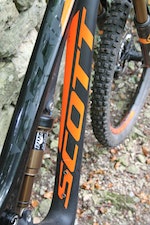 All that performance comes at a price though, £6,499 to be precise, though SCot do offer a wide range of models so there are more affordable versions to choose from.

With The Cycle Show fast looming, here's the round-up of some of the bikes that will be there.

With The Cycle Show fast looming, here's the round-up of some of the bikes that will be there.

Eurobike 2014: The latest bikes and kit from Orange, Met, Transition, Canyon and Schwalbe

Some highlights of new bikes, tyres and helmets from the world’s biggest bicycle show

Eurobike 2014: The latest bikes and kit from Orange, Met, Transition, Canyon and Schwalbe