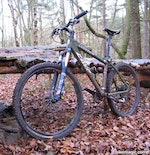 Cove has built up an envious reputation in the UK as designers of cool and funky frames, catering for XC race whippets up to the freeride/DH set. It all kicked of with the Stiffee though. Prevalent in the UK scene for several years, the Stiffee helped to spearhead the current trend for long-travel hard tails. Cove has been tweaking the frame over the years, and for 2006 it gets some more changes and two new colour choices.

Cove was one of the first manufacturers to use Easton’s square-to-round RAD tubing. It’s a tubeset that got very popular for a while, but these days it’s fairly rare – a lot of the bigger manufacturers have adopted own-brand lookalike pipes. But the Stiffee still uses the real thing, and the chunky tube sections set the tone for the bike’s intentions. The forged head tube is dual crown ready if you wish. To create a load of stand over clearance the top tube drops a generous amount below the top of the seat post, with the rear stays meeting above this junction in characteristic Canadian style. The seat clamp slot is in a mud-friendly front location.

The rear stays are slender in comparison to the front end, but substantial by most standards. They curve down to new-for-’06 forged dropouts, complete with replaceable derailleur hanger. The stays provide plenty of tyre clearance – 2.3in rubber isn’t a problem – and heel clearance is adequate. The new back end is much tidier-looking than previous incarnations.

All the welds are neatly finished, and the frame-only weight is a not unreasonable 4.5lb, occupying the middle ground between superlight race weight and something that’s built to be totally indestructible. Time has proved the Stiffee to be more than strong enough for nearly everything – you’d have to be a complete lunatic to need something with significantly more metal in it. The price, and the weight, put the frame in good company.

The geometry is distinctly relaxed, with the quoted numbers being a 67.5deg head angle, 70deg seat, 23in top tube, 13.25in BB and 16.6in stays on the 17.5in size. That’s with a 130mm Marzocchi fork – most other forks are a little shorter for the same travel, so it’ll be a wee bit steeper than that, but it’s still an intentionally laid-back ride.

Stiffees come as a frame only, so the bits are up to you. Our test frame was built up with a pretty solid spec, featuring the dependable Shimano XT in all the main shifting spots with a plethora of Race Face Evolve components including the innovative new Evolve XC post. Mavic XM819 rims on Hope hubs are a reliable combo. The wheels came fitted with some rather tired Tioga tyres, we quickly swapped them out for some fresh Contis in the interests of staying on the trail.

Up front, the Fox TALAS forks suited the frame well, but a beefier fork would suit it just as well in a different way. This is the beauty of the Stiffee. It’s tough and will handle a big spec, like some Bombers or Pikes, a double-ring bashguard setup, fat rubber, and be perfectly tuned for freeriding/jumping/dropping antics. Thinner tyres, a triple chainset, lighter forks, and you’ve got a 27lb trail (or not-really-about-winning race) machine. It’s certainly versatile.

Agile. Swift. Strong. Just some words that find their way out of the keyboard when describing the key qualities of the Stiffee. It’s a roller coaster of ride, taking you quickly to the top of hills and even quicker back down. The ride is a fine example of how numbers rarely tell the whole story – you’d expect it to be a bit of a wobbly handful up hills but it’s perfectly fine. It’s stiff in a good way – it puts the power down without hesitation and is totally predictable in all conditions. We occasionally found the back end skipping around a bit, but a lot of that will be down to the shape of the bike encouraging us to “ride the fork”. It’s a fantastically pingy ride, and thanks to lots of seatpost and big, soft tyres it’s even reasonably comfortable.

Our first ride on a Stiffee was at last year’s Cheddar Challenge. The course (one of our favourites) has a long, hard climb with swathes of fast, technical descents, and is a good testing ground for the frame – it was perfect for the course. It’ll slide round corners spewing gravel and leaves from the rear tyre, rip along skinny singletrack, balance along North Shore see-saws and generally reward you with the biggest smile you’ll get from riding a bike. It even climbs like a race bike too, well, nearly. We love it.

Negatives: Needs to be ridden hard to get the best from it, a little spendy

Like the Maxlight Pha5e we tested recently, the Stiffee is designed to be strong and stiff, yet the Stiffee manages to be a more versatile all-round do-everything bike. The lines are incredibly clean, there’s a great range of available colours, and you’re buying a slice of history.

Nicolai Helius CC £1,550 (frame and shock) 4-5in travel all-round FS bike Custom options German manufacturer Nicolai is a fairly small outfit, but it has an enormous range of...

Pipedream Aonach Mor £1,295 (tbc/frame only) Reasonably-priced titanium full-suspension frame Still a prototype 4.7 or 6in travel This isn’t a bike test of the traditional sort, because the Pipedream Aonach...

Nicolai Helius CC £1,550 (frame and shock) 4-5in travel all-round FS bike Custom options German manufacturer Nicolai is a fairly small outfit, but it has an enormous range of...

Pipedream Aonach Mor £1,295 (tbc/frame only) Reasonably-priced titanium full-suspension frame Still a prototype 4.7 or 6in travel This isn’t a bike test of the traditional sort, because the Pipedream Aonach...