After several years of development, Cotic’s Rocket finally saw the light of day when it was launched at the Bespoked Bristol show a couple of weeks back.

A sleek looking bike, all straight tubes and low slung stance, a smart suspension linkage design and employing steel tubes in the main frame, the first we’ve seen on such a long travel bike, had us desperate to tear it from the stand and hit the singletrack.

Fortunately we didn’t have to wait too long, as last week we headed north to the bustling village of Calver in the Peak District, where on a small industrial estate is situated Cotic’s global headquarters.

It’s approaching ten years since the first Cotic rolled off the production line, and this is their second full suspension bike to hit the market in that time. For such a small company the level of productivity is tremendously high; it’s no easy feat producing a full suspension bike.

The Rocket follows on from the Hemlock, a bike that while impressive didn’t really tick the boxes. What it did offer is plenty of feedback and development time, which has all been digested and scrutinised by Cy Turner, Cotic’s founder, and put into the Rocket. It’s quite a leap forward.

The Hemlock’s successor differs in many ways, not only aesthetically but also in the use of steel for the manufacture of the frame. Why steel? When pressed on this, Cy is keen to state that he isn’t wedded to steel. It would be easy to say the sole reason they’re using the material is to follow in the lines of the popular Soul, Solaris and BFe. But it isn’t.

There’s actually a valid engineering reason in opting for steel over aluminium, the more natural choice for such a frame. When penning the design and the DropLink suspension, they found a 35mm seat tube was the maximum diameter they could get away with. At this size an aluminium tube just wasn’t stiff enough, but a steel tube, fat by steel standards, hit the stiffness figures needed to make the Rocket work. 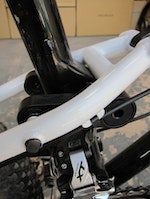 And from there you, having decided the 35mm steel tube is the answer, the rest of the main frame has to be steel too. One of the new Reynolds DZB (Double Zone) butted down tubes is used, which avoids the need for a gusset, while ensuring it passes the tough CEN tests. A Reynolds OvalForm top tube with a small gusset on the underside completes the front triangle.

The rest of the frame is litter with current design features rapidly becoming standard. Bracing the top tube and down tube is a 44mm head tube, in the middle is a dropper compatible 31.6mm seat tube, with clips along the top tube for the hose. Out back is a Syntace X-12 142×12 bolt-thru rear axle. For the bottom bracket Cotic opt for a standard threaded type. There’s ISCG05 mounts for a chain guide.

The shock mount is bonded to the down tube, with three rivets there purely to hold the mount in place well the bonding agent sets. When questioned about this Cy assures us that he is satisfied with the strength of the joint, pointing out the design is intended to evenly distributes stress up and along the down tube.

Talking of testing, Cy was keen to tell us how the Rocket flew through all its tests; after a week of rigorous testing on one such machine they received a call from the facility asking if they could take the Rocket off, such was its resistance to failure. Gear cables and the rear brake hose are routed cleanly along the top of the down tube, passing through the shock mount and underneath the shock. A bottle can be mounted in the space between the shock and top tube, a useful inclusion for people who don’t like hydration packs, and boosting its all-day credentials.

Which brings us neatly to the weight: you would think it would be heavy, but surprisingly it isn’t. A naked large frame hits 7.3lbs (3.31kg) on the scales, and with a Fox shock fitted it is 7.85lb (3.56kg), it’s knocking on the door of many similar aluminium offerings. A typical full build weight for a medium, with not particularly exotic components, is in the region of 29.97lbs (13.59kg).

The suspension is all-new. The shock is driven directly by the chromoly seat stays, and mounted just ahead of the seat tube on a pair of 15mm axles is the DropLink. A short and sturdy linkage, it serves a dual purpose; increasing the stiffness of the rear swingarm and allowing the spring rate of the suspension to be tuned.

The asymmetric chaintays are aluminium. Cotic found it was far easier to use aluminium in this application, with the necessary machining of the dropouts, rear pivot, main pivot and disc mounts just much easier to machine in aluminium. Cotic will offer three frames (there are no complete builds on the agenda, yet), starting with a Fox shock, a Marzocchi Roco Air LO in the middle and, if you’re feeling flush, a BOS air can. We rode the Marzocchi Roco Air LO, and it was the first time we’ve ridden this shock. Getting the sag set, the shock revealed a very supple feel in the early part of the stroke. Small bump sensitivity was good, and it settled into the mid stroke nicely, managing to feel plush but not wallowy.

The Rocket’s suspension has been designed to be progressive, and the degree to which it ramps up at the end of the stroke is very noticeable when riding it. It’s not a design that feels ‘bottomless’ like other suspension designs on the market, but after a couple of hours on the local trails we can see where Cotic were coming from in choosing such a design.

We weren’t afforded the luxury of time to really tune the shock, and as a consequence we didn’t get full travel, as the rubber o-rings position on the shock shaft showed after our ride. It would be nice to try the Fox shock for comparison as well; as that’s a unit we’re more familiar with.

I have one concern with the bike though. The axles that hold the rear of the DropLink in place protrude from the chainstays with an unsightly and sharp edged metal end cap. Not only is it ugly on what is otherwise a great looking bike, but I was forever catching my calf muscles on them (and it’s not like I’m Chris Hoy), with each and every pedal stroke. Towards the end of the ride I had two rather red and sore marks on the inside of my legs. It’s something that needs ironing out.

talking geometry, it’s a slack bike, a 66.5 degree head angle sit the bike right in the ballpark for this style of bike. The top tube measures 23.4in on the medium, a 73 degree seat angle, 428mm chainstays and a 105mm head tube. And with a 13.3in bottom bracket it is pretty low too.

Those shock options are priced as follows:

Ride performance – strap yourself in

You’re probably expecting us, under a section entitled ‘ride performance’ to wheel out some old line about ‘steel is real’ and ‘it’s got that steel feel’. We’re not going to. To really get to that level of testing would require some comparative testing with an equivalent aluminium bike.

On our long drive north we had plenty of time for our scepticism about whether steel could work in such a long travel bike to settle in. Happily, any such worries were completely blown away after a couple of hours of blasting around the Peaks. Cotic have really excelled here, producing a bike that performs brilliantly. Eyes wide open then, the Rocket, in a nutshell, is an absolute blast to ride. Words that came quickly to mind after the ride were quick, stable, planted, solid, fun.

A long climb from the Cotic warehouse revealed a suspension platform that was nice and controlled. It handles rocky technical climbs, with the suspension giving loads of traction. And certainly doesn’t feel at all heavy when riding, though it’s no welterweight. That’s one bike thoroughly ticked.

How about the descents? The first of many demanding downs was something that can only be described as an all out assault on the senses, a boulder strewn path picking the quickest line down the hill. With rocks pinging off the wheels and the tyres sliding around for grip, any flaws would certainly be highlighted right away. But none presented themselves.

Instead, it was proper quick, incredibly planted and felt right at home. Like it was designed for this very type of trail. Out of corners the Rocket feels alive, it’s got an ability to burst out of corners with incredible energy. A few pedal strokes and bang you’re into the next corner. Shape yourself up for the entry, eye up your line, turn in, bank it over on the edges of the tyres, and wammo you blast through. Controlled and balanced.

Without the opportunity to test the Rocket alongside a similar travel aluminium full-susser, it’s not possible to draw conclusive comparisons. The suspension is clearly very well designed and leads to a generally very compliant and satisfactory ride. Riding the bike on the trails it has been designed and extensively tested on, it’s clear to see why and how the Rocket has evolved.

It’s a bike designed for efficient climbing and solid and stable descending on rough and unpredictable terrain at high speed. It’s a very progressive feeling suspension design, it’s feels constantly coiled up, just waiting for you to hit the boost button and get some air.

Sliding, drifting and popping over lips and roots around the Peak District, the Rocket was really living up to its name. This bike couldn’t have been called anything else.

I couldn’t really believe a steel 150mm bike could work before I rode the Rocket, but Cy has shown his engineering nous in putting together such a fine riding bike. A few issues need to be ironed out, but everything else, the suspension, stiff steel frame, weight, price, geoemtry and handling are all excellent.

Inside Pearl Izumi – behind the clothing company

We visit Pearl Izumi’s headquarters in Boulder, Colorado to see what goes on

Inside Pearl Izumi – behind the clothing company