Finally, for 2013, the Jekyll gets the fork it deserved from the start. The Fox 32 150mm fork was a great bit of kit, but it didn’t have the stiffness to match the capability of of the Jekyll’s frame.

This has been rectified for 2013, in a move the designers recognise should have happened two years ago (but before the Trigger the Jekyll had to fullfill a wider ranging role). 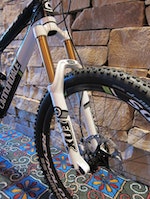 So, the carbon Jekyll’s now get the brand new Fox 34 fork with 160mm travel. The fork, first developed for the growing 29er market, promises increased stiffness over the 32 without the weight penalty of the 36.

The Jeykll has been a popular bike with enduro racers. Jerome Clementz and Mark Weir both race their Jeklly’s around the world. Their bikes are far from stock.

The exciting new Jekyll MX is a bike designed from the groundup to appeal to this growing enduro scene, with a build kit that will please anyone looking to compete in the growing choice of enduro-style events.

The build kit comprises an aluminium frame (rather than carbon) with a Fox 36 Float 160 fork, SRAM 2×10 with a 36/22 chainset, WTB Striker wheels, MRP chain device and short stem and wider 740mm bars. 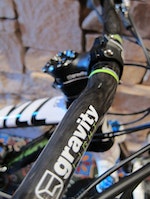 All the Jekyll’s now get wider bars (740mm) and shorter stems.