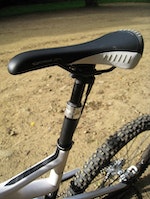 2011 will be remembered in mountain biking as the year dropper seatpost started becoming specced a whole lot more on bikes from the big manufacturers, and it’s one of the changes we think people are really going to take to this year.

The benefits of a dropper post like the RockShox Reverb (which has done a lot to boost their acceptance) makes a lot of sense on paper, but it’s only when you ride one that its advantages really hit home. I’ve been shredding the trails for the past couple of months on Cannondale’s Jekyll 1 Carbon, a bike that comes as standard with the Reverb. And it’s transformed my riding.

It’s the first time I’ve put a lot of miles in on one, and I can categorically say that I find it difficult going back to a bike without one. Especially when tipping into a steep rooty descent! With the handlebar mounted lever, it’s so easy and quick to slam the saddle out of the way as you drop into the top of a steep and/or technical run, where you know you will benefit from not having the saddle shoved up your cheeks.

It’s not just long travel all-mountain bikes, like the Jekyll, that can benefit from them; cross-country bikes would be an ideal home for them, considering how high saddles usually are on such bikes. Only the weight penalty is an obstacle to mass acceptance.

Dropper posts have been around for years, they aren’t new. But the Reverb, it’s safe to say, is the first that has really popularised the concept. It works brilliantly, has proven rock solid, but it’s pretty damn expensive. There are others, from X-Fusion, Giant, Crank Brothers, and one in the pipeline from Fox, so you can see there’s more choice than ever before.

As evidence of the growing number of dropper posts being fitted to bikes this year, here are four of our favourite bikes that feature a dropper post.

Essentially based on the Remedy, the Slash is a slacker, burlier bike ideal for the rider with a downhill/gravity focus. So gravity events, the Megavalanche, trips to the Alps, stuff like that is what the Slash is pitched towards. Highlights include Fox 36 Talas fork, DRCV rear shock, 2×10, chain device and a RockShox Reverb seat post.

Designed as the one-bike-for-everything sort of guy, the Jekyll is Cannondale’s offering for the person who wants to ride one bike everywhere. A clever pull-shock and handlebar lever switches between 90mm and 160mm of travel. Along with Fox 32 150mm forks and Mavic Crossmax ST wheels, it’s fitted with a Reverb post.

UK brand Saracen, reborn successfully a couple of years ago, has taken the popular 140mm Ariel and boosted travel to 160mm in this model. Along with geometry tweaks, the bike is built with a Fox 36 fork, single ring and chain device transmission, and a Kind Shock 125mm seatpost.

It’s been in the company’s range for a long time, but has changed much over the years. The latest change is the inclusion of Giant’s own dropper seatpost, the Contact Switch-R. Their own design, it provides 100mm of limitless height adjustment and an Anti Twist Technology keeps the saddle pointing in the right direction.

Do you agree? Let’s hear your thoughts in the comment box below:

We went along to Rutland Cycling’s 29er demo day to get the reaction from riders. Read on to see how they fared on the big...

As she prepares for her first season going it alone, Tracy updates us on the off-season and recovering from injury

We went along to Rutland Cycling’s 29er demo day to get the reaction from riders. Read on to see how they fared on the big...

As she prepares for her first season going it alone, Tracy updates us on the off-season and recovering from injury