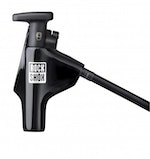 SRAM have been busy (when are they not) with a bunch of new product updates for the following year. It may still be April but that doesn’t mean the industry isn’t starting to roll out news of their 2013 products.

Rather than any brand new shock releases, there’s plenty of subtle tweaks and updates for several of their products. There’s a new RockShox Monarch RT3 shock and Solo Air option on SID, Reba and Revelation forks, a redesigned PushLoc remote lever, updated Avid Elixir 5 brakes and 650b wheels. 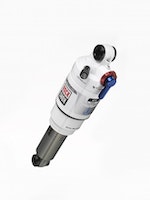 The new Monarch RT3 shock has a neat three position lever that switches the floodgate between open, platform and lockout. It also boasts a new Rapid Recovery rebound circuit.

The already excellent PushLoc remote lever has been redesigned to be more ergonomic, reckons SRAM. It can be used now with a MatchMaker clamp option. It weighs just 48g (without cable). The SID, Reba and Revelation each get a new Solo Air spring option for next year. We’re fans of the simplicity of setup the Solo Air system allows, with one valve on the top filling the positive and negative chambers simultaneously.

We saw SRAM’s new Rise wheel range not so long ago, and with the current debate about the future of wheel sizes, they’ve rushed a 650b option into the line-up. The Rise 40 wheels will have aluminium rims and stainless steel spokes, with a 15mm bolt-thru or 9mm QR front axle option and 12×142 or QR rear hub options. No pictures of the wheels yet…

Preparing my bike for racing this Sunday, with a good wash and some new parts fitted