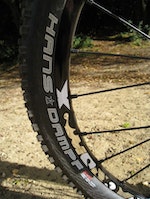 Dropping into a rooty right hand corner, leaves piled thickly across the trail, the Schwalbe Hans Dampf tyres are finding traction even as I push them hard into the outer edge of the berm. A puff of dirt and a plume of leaves kick up into the air as the rear tyre drifts over the top of the berm, drifting sweetly, before I flick the bike over into the next corner.

Introduced earlier this year, Schwalbe’s new Hans Dampf all-mountain tyre is a chunky affair. It’s an attempt by the German company to increase its offering of big tyres that are designed to be tough and rugged enough to silence the criticism about the previous big volume tyres not standing up to aggressive riding.

Measuring 2.35in and weighing 750g for the Trail Snake version we have here, it’s right on the money compared to other tyres in this market. It’s packed with tech; Snakeskin armoured sidewalls, a triple compound thread, 3-ply casing, 67tpi and tubeless ready – not full UST but with sealant it will inflate onto an appropriate rim.

It’s useful to run the odd name, Hans Dampf, through a German-English translator to get a measure of the company’s thinking behind this new tyre. It stands for jack of all trades, not always the fairest of descriptions but is spot on for the tyre, since it’s light enough for all-round trail riding but yet grippy and burly enough for aggressive trail shredding action

The tread pattern isn’t groundbreaking; a fairly typical layout of large square lugs interspersed along the centre, large square shoulder knobs and in between knobs set at an angle, to ease the transition from upright to leaning over. There’s loads of clearance, and siping in the knobs helps the tread find grip by allowing them to flex under pressure. Additionally, the different compounds used manifests itself with a softer rubber for the shoulder knobs. As I found out hitting my local trails recently, which are in really good condition at the moment (meaning they’re dry), the compound provides a tyre with meaty grip, and the tread pattern delivers reassuring traction at all lean angles. Over rocks and roots and through loose corners, the level of traction is off the scale. They inspire loads of confidence, allowing you to carry more speed into the corners than you might with other rubber yet know they’ll hook up all the way through the corner. It’s like riding on a sea of Velcro.

However, matters aren’t quite so rosy when it comes to climbing. They’re draggy and really quite slow, turning even easy climbs into sweaty incidents. However, the company does offer the Hans Dampf with a firmer, less sticky PaceStar compound that just might go some way to rectifying this issue.

Does Bikemagic rate the Hans Dampf tyres then?

Yes. A fully capable tyre for a range of conditions, with incredible grip whatever the trail throws your way, the Hans Dampf is an impressive addition to the Schwalbe range.

Is there any such thing as the perfect winter mountain bike? We take a look at a few offerings

With the mercury slowly dipping, it's important to look after your legs through the winter