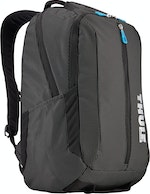 I try to ride into work as much as possible, especially in the summer. Partly due to fitness, partly because it’s a great way to start a day, and partly because of petrol prices (though that one’s starting to be less of a problem), it presents a problem. In the car, your laptop sits shielded from the elements, your phone’s happily protected as well, and you’ve got as much room as you like for your lunch. This often isn’t the case when you’re riding into work. Enter the Thule Crossover.

What actually is a “Crossover” backpack? Well it’s kind of the “all-mountain” approach to cycling – commuting and riding for fun, and the brand, Thule, is familiar to most people. Typically Swedish, they take beautifully functional designs and apply them to bike racks, bags… anything you need protecting or transporting, really. There’s a brilliant video on the web page showing someone packing the bag with something in each pocket, which doesn’t resemble in any way how I pack in the mornings, I’m afraid. I tend more towards the “protect the laptop and throw everything else in the main compartment” theory, but don’t let that stop you from using the bag properly. It’s got pen slots, sections for business cards – everything under the sun.

There are some seriously clever little details. I suffer from paranoia that one of the pockets isn’t closed fully and that my phone – or anything else – has jumped out. I call it backpackopenoia. The Crossover has settled my fears – there’s a little elastic catch on each zip that you clip the zip on to stop it opening. Genius. The phone/ glasses case (called the “safe zone”) is also a hard structure so nothing can break your screen and glasses if they’re squashed or dropped. On top of that (well, not literally), there’s an iPad sleeve, there are numerous zipped compartments for keys, headphones, or anything which requires a little zipped compartment really.

How about the basics of being a backpack? Well, it’s well padded and not too hot, water resistant, a good size at 25 litres, and has the usual chest strap and bottle pocket. The highest praise you can give a bag is that you don’t notice it too much – and this isn’t too noticeable. It’s even aesthetically nice.

So if you commute, by road, mountain bike, or even hot air balloon I suppose, and you need a backpack to serve as your organised minature car boot, look no further.

The Thule ProRide 951 is an excellent roof-mounted bicycle rack that is easy to use and very convenient.

The Thule ProRide 951 is an excellent roof-mounted bicycle rack that is easy to use and very convenient.